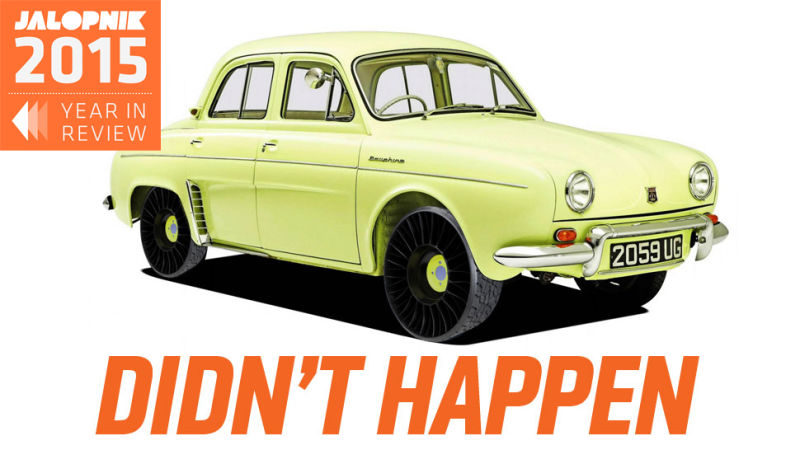 It was easy for us to name the best cars we drove in 2015. Picking the worst ones, believe it or… Read more Read more

1. Tweels as the next big thing.

I predicted this back on the second day of 2015. Jack shit happened in the popularization-of-tweels front.

2. Car colors other than boring silvers, whites, and grays will become popular again.

Nope. Other than the usual chromatic daredevils on the extreme low- and high- ends of the spectrum, most traffic jams in America remain overwhelmingly monotonous and monochrome.

3. CUVs will fade in popularity as everyone finally wises up and realizes they just want a nice wagon, instead.

Not even close. CUVs are still the fastest-growing segment of new car sales. I guess America really does want a of a sort-of-wagon on big tires that’s half-assedly designed to go off-road, which they never will.

There’s enough companies now making cars that can, at least in certain limited circumstances, drive themselves. To get people more aware and excited about this, some group of manufacturers — say, Tesla, Mercedes-Benz, VW/Audi, Nissan — should have gotten together to form the RRS, Robotic Racing Series. They’d have had unmanned car races and slaloms and autocrosses and all sorts of crap. People would love it, especially the end-of-season demolition derby.

5. The return of Saturn

Everyone was predicting Saturn’s triumphant return in late 2014. Most analysts felt it would be as the first mass-market electric amphibious car maker.

Whatever happened to that?

6. Paul Elio and Elon Musk either fight or kiss or something

There’s tension there, palpable, thick tension, but I can’t tell if it’s sexual or competitive or what. It’s possible I may be confusing this for something I wrote in my slash fiction.

7. Volkswagen should have doubled-down, issued threat to world on big screen at UN

Volkswagen’s had a rough year, and their conciliatory admission of wrongdoing may be the right thing to do, but it’s not what should have happened.

A crazed, enraged Martin Winterkorn should have gotten on the big video screen we all imagine is at the front of that big UN meeting room, and blackmailed the world into buying non-emission compliant diesels, or else. That would have been much more exciting.

This has been possible for decades. What are we waiting for, already? It doesn’t matter if you think they’re tacky — the time has come.

I’m sure the new show will be great, and whatever the old TG crew does on Amazon will prove fun as well, but if the BBC was smart, they’d have just let the guy who Clarkson hit take a free punch back at him live on TV, and then just incorporated a new segment involving Jeremy Clarkson and some manner of punching. They left money on the table.

As it stands in the U.S. right now, if you want a rear engine, you can only have a Porsche 911 or a Smart. Oh, and a Tesla, I guess. I was sure this was the year that was going to change. Oh well.