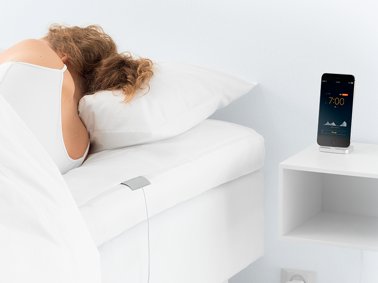 Apple has made a move to get in bed with you.

The iPhone maker has acquired Beddit, a startup that makes a sleep sensor. Beddit notified customers on Monday of the acquisition, alerting them that their data will now be collected in accordance with Apple’s privacy policy. CNBC first spotted the update to the Beddit’s webpage.

Apple didn’t immediately return a request for comment. The company sells Beddit’s sleep monitor for $150 in its store.

Beddit’s sensor looks like a thin rectangular pad that users place between their sheets. Working with a corresponding watch or iPhone app, it tracks users’ heart rates, awake time and snoring. Based on that data, the app calculates a sleep score and can wake users up at an “optimal” time based on a smart alarm.

Apple Watch users have long wanted to have sleep tracking built into the device. Beddit’s app was one of the many that served as a workaround. Beddit has removed a page that linked to the app from it’s web site; however, the app was still available in the Apple Watch App Store Tuesday afternoon.

Late last year, Apple refocused the marketing for the Apple Watch around health and fitness. The move appears to have paid off; last quarter sales of the smartwatch were double that of the prior-year period.

Rumors suggest Apple might double down on this focus on health, possibly by building a glucose monitor into the watch.

Given Apple CEO Tim Cook’s obsession with his Apple Watch — which he claims helped him lose 30 pounds in a year — the acquisition of Beddit could signal that Cook was on the hunt for something to help him sleep too.

SEE ALSO:Two of the biggest questions hanging over Uber’s legal fight with Google are ‘likely’ be decided this week