Various Wall Street firms have flagged similar risks that stock-market investors should have on their radars right now. These include a profit slowdown, the US elections, lack of progress on trade, and a corporate-credit crisis.

But one risk that is not being talked about nearly enough is inflation, according to BlackRock, the world’s largest money manager with $6.8 trillion in assets.

This apparent oversight can be explained by the fact that inflation — defined as a sustained increase in prices across the board — has lived below expectations for a long time. The Federal Reserve’s favorite gauge of inflation has averaged 1.5% over the past decade according to Bloomberg data, missing its 2% target.

Additionally, a separate measure compiled by BlackRock shows there has yet to be an inflation surprise comparable to the oil-price shock of the 1970s. It is represented in the red area chart below. 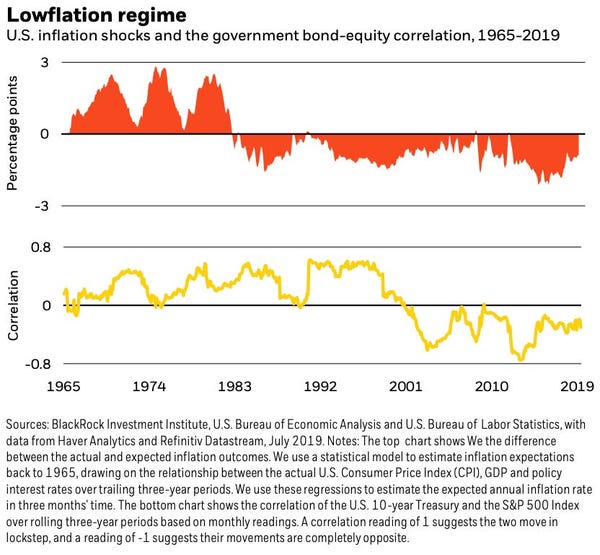 Even BlackRock does not consider an inflation shock next year as a likely event. However, multiple leaders worry about the damage such a surprise could do to their clients’ portfolios, they are flagging the danger before it’s too late.

Inflation is “the hidden risk longer-term” given how few investment professionals have experienced it, said Tony DeSpirito, BlackRock’s chief investment officer for fundamental US active equities, at a recent media briefing.

Marilyn Watson, the head of global fundamental fixed income strategy team, was in agreement along with Mike Pyle, the global chief investment strategist. All three of them had the same response to a question about the most underappreciated risk in the market right now.

Pyle elaborated that their concern is about how inflation would impact diversified portfolios of stocks and bonds.

When stock prices fall in a fear-filled climate, bond prices typically rise as investors flock to a safer asset. In other words, bonds and stocks normally have a negative correlation with each other.

But if inflation rises above prevailing bond yields, bonds would lose their appeal to investors as a safe haven. This could upend the negative correlation and alter the diversification benefit of bonds, Pyle said.

“That is a really high-impact event — even if it’s really low in probability risk — and one that’s very unappreciated by market prices,” Pyle said.

Higher inflation could stem from a rebound in economic growth — a prospect that would not be far-fetched if more progress is made on the US-China trade front.

On Friday, the US announced it agreed to lower the tariff rate on China to 7.5% from 15% and cancel plans to target virtually all imports from that country. Following this news, the bond market’s inflation expectation over the next decade — US 10-year breakevens — rose to 1.75%, the highest since July according to Bloomberg data.

The big picture still has not changed. So what’s an investor to do in order to protect themselves from a real surprise? BlackRock recommends buying Treasury Inflation-Protected Securities, a category of US government bonds that work as advertised because their yields are indexed to inflation.

And if you would rather not buy TIPS directly, BlackRock has an exchange-traded fund for you: the iShares TIPS Bond ETF.