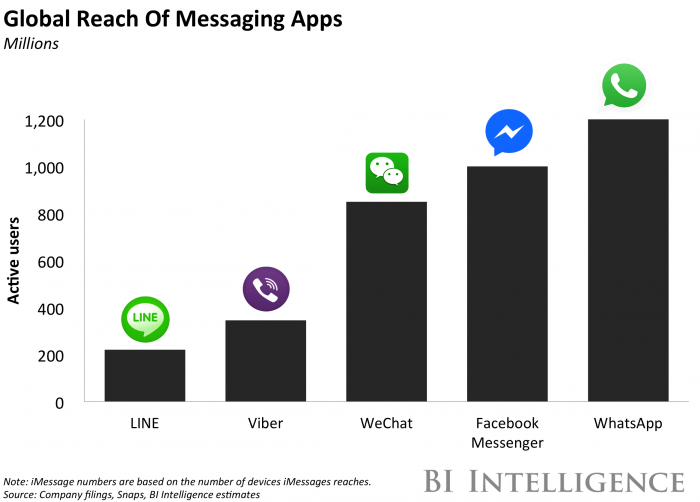 Tencent turns to cloud and innovation for growth

This story was delivered to BI Intelligence Apps and Platforms Briefing subscribers. To learn more and subscribe, please click here.

As growth slows in China and emerging markets start to pick up speed, China’s three largest tech conglomerates — Baidu, Alibaba, and Tencent — are looking to expand their businesses globally, The Economist reports.

These efforts are largely coming in the form of acquisitions and investments in foreign markets, as competition in China thwarts their domestic growth, entrenched players in cash-flush developed markets prove difficult to dislodge, and a combination of the two complicates expansion into fast-growing emerging markets.

While Baidu seeks talent from developed markets, and Alibaba invests in payments and services solutions, Tencent, China’s biggest technology giant in terms of both revenue and profit, is bent on growing its messaging and gaming presence in new markets. Tencent is the largest gaming company in the world according to Newzoo, and owns WeChat, a messaging platform that had 846 million monthly active users (MAU) as of November 2016. Tencent also has services in mobile payments, social platforms, and e-commerce, among other things. In the fast-growing Indian market, Tencent’s been unable to topple Facebook-owned WhatsApp, a messaging platform that touts 1.2 billion MAU. While the ability of WeChat to do everything from schedule doctor appointments to pay friends makes it an alluring one-stop-solution for consumers in China, more simplistic solutions seem to reign in India; WhatsApp’s sole functionality is communication. While WeChat acts as both a communications platform and an ecommerce source for Tencent, it’s gaining its foothold in the Indian market with investments in more focused companies.

The BAT Chinese tech platforms are expanding via investments and acquisitions because it’s proving challenging to expand their own products in foreign markets, which is likely due to the differing needs of consumers in different markets; The environment that made these companies successful in China isn’t replicable in foreign markets, according to The Economist. Success in investments could challenge US messaging platforms, like Messenger and WhatsApp, and US e-commerce giant Amazon, in their efforts to expand globally, and more specifically, to gain market share in India. It’s likely that BAT will continue to look to overseas investments and acquisitions for expansion.

These numbers have caught the attention of a wide range of businesses, publishers among them. News industry leaders including the Wall Street Journal, The Economist, and the BBC are establishing a presence on a number of chat apps in an effort to be out front and build an audience on the latest platforms where people are consuming content. These early adopters are experimenting to learn which chat apps work for their audience and how they can leverage chat for the distribution of digital content, including articles, images, surveys, and video.

BI Intelligence, Business Insider’s premium research service, has compiled a detailed report on messaging apps for publishers that looks at the appeal of these apps and how they’re becoming a dominant platform for media consumption. It compares the leading chat platforms, including WhatsApp, WeChat, Facebook’s Messenger, and Viber, and what features publishers should know about when thinking about how they might leverage these properties. It also looks at strategies for content distribution across chat apps and finally spotlights some of the challenges that publishers may encounter as they begin to dip their toes into content distribution via messaging apps.