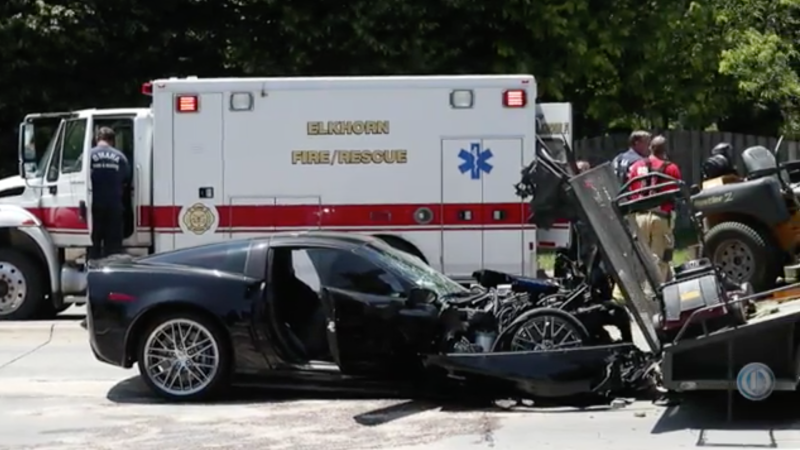 Omaha police said a Chevrolet Corvette ZR1 driver leading a chase that reached 132 mph crashed into vehicles twice along the way. Police said the driver, who posts what appear to be street racing videos on social media accounts, kept driving with parts strewn from the vehicle after the first crash. Great job!

The pursuit started when an officer said the Corvette passed him while merging onto an expressway, according to the Omaha World Herald. Police said the driver “floored it” when the pursuit began, crashing into both a van and the trailer for a lawn service along the way. The second crash allowed police to catch him.

The paper reports that the three people who were in the Corvette wound up in the hospital with non-life threatening injuries. No others involved in the crashes were reported as injured.

Police told the Omaha World Herald that the Corvette hit a van first, and that both its wheel and a “bounty of plastic parts flew off” after the impact. But police said the car kept on going until it hit the trailer of a lawn-service vehicle, and those inside the vehicle told the paper that the crash jolted them and left them with sore backs.

The two women in the car with the Corvette driver both went to the hospital alongside him but were not suspected of wrongdoing, according to the Omaha World Herald.

The Omaha World Herald reports that police would arrest the driver, Shaheer Atiqullah, on suspicion of “felony flight to avoid arrest, willful reckless driving, speeding and driving with a suspended license.”

Come on, man. It would hard to get a detention slip with that much stuff on it, let alone an arrest warrant.

But wait, there was already a warrant out! From the Omaha World Herald:

Additionally, there was already a warrant out for his arrest for willful reckless driving, driving under suspension and failure to appear in court, Klimek said.

Court records indicate that Atiqullah was charged with first-offense willful reckless driving and driving under suspension earlier this year. A warrant was issued April 21 after he failed to appear for trial, according to Nebraska court records.

Atiqullah pleaded guilty earlier in 2017 to a misdemeanor charge of exhibition driving, according to court records.

Atiqullah, upon a search, frequently posts what appear to be street-racing videos like the one below to his personal Facebook page. He posted a link to a Craigslist ad for the 2011 Corvette just a few weeks before the police chase and subsequent crashes, with the car listed for $64,995 and a preference to not sell it locally.

The Corvette, when listed, had an advertised 26,000 miles on the odometer. If that’s to be believed, the car likely didn’t make it to the 30,000-mile mark. It probably won’t be sold very easily, either.

Keep the fast driving on the track, everyone. As for the rest of this recklessness, just don’t do it—anywhere.

Ford Mustang Ripped In Half In Alleged Street Racing Crash