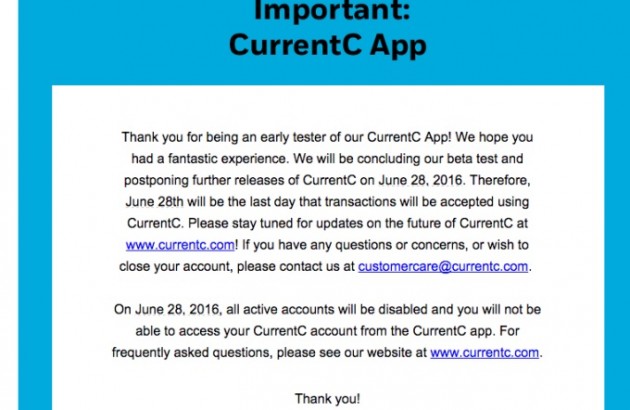 When Apple Pay first launched back in 2014 the company faced some unexpected competition from CurrentC, a planned alternative with support from some of the biggest retailers around. Now, almost two years later, Apple Pay is still going strong but it looks like CurrentC is pretty much dead.

Consumerist reports that CurrentC recently sent out a message to its beta testers in Columbus, Ohio revealing that the service will be discontinued later this month. “We will be concluding our beta test and postponing further releases of CurrentC on June 28, 2016,” the email reveals. “Therefore, June 28th will be the last day that transactions will be accepted using CurrentC.”

That doesn’t necessarily rule out the possibility of a relaunch in the future, but it doesn’t look great either. Merchant Customer Exchange (MXC), the group behind CurrentC, is also disabling all active accounts and locking people out of the app. A spokesperson told Consumerist that there are no definite future plans, but that MCX is “looking forward to analyzing and learning from the data we gleaned throughout the beta.”

The news could also mark a shift from consumer service to enterprise technology. In that case, CurrentC could continue on in some capacity, even if it’s not competing directly with Apple Pay and other mobile payment apps like Android Pay and Samsung Pay