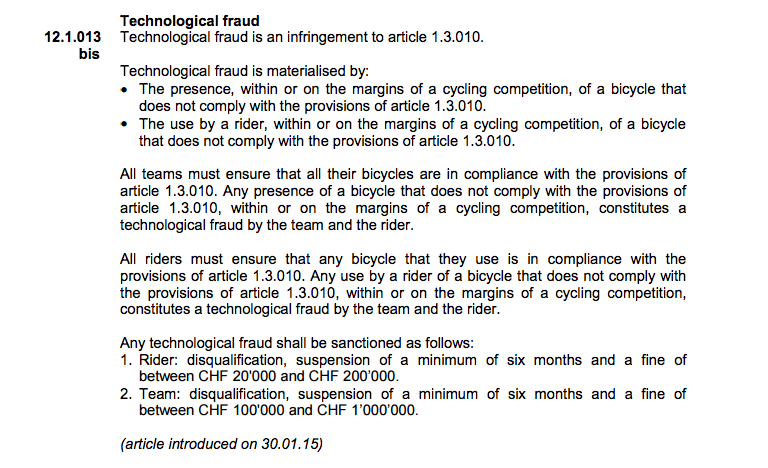 The Union Cycliste Internationale (UCI) confirms that pursuant to the UCI’s Regulations on technological fraud a bike has been detained for further investigation following checks at the Women’s Under 23 race of the 2016 UCI Cyclo-cross World Championships. This does not concern any of the riders on the podium. Further details will be shared in due course.

A UCI representative later told Business Insider by email that it was sticking to its statement and that its president, Brian Cookson, would address the issue at a press conference on Sunday at 10 a.m. CET.

The Belgian sports site Sporza said the Belgian Cycling Federation reported that the bicycle was raced by Femke Van den Driessche in the under-23 women’s event.

The UCI has been taking the possibility of “technological fraud” seriously over the past few years. Penalties include disqualification, a suspension of a minimum of six months, and a fine of between 20,000 and 200,000 Swiss francs. Teams could be fined up to 1 million Swiss francs as well.

Here are the UCI rules and penalties regarding technological fraud (PDF): Business Insider reported in September from the UCI Road World Championships in Richmond, Virginia, that the winner of the elite men’s individual time trial, Vasil Kiryienka of Belarus, had his bike inspected for a motor after he crossed the finish line. No motor was found.

This photo, provided to Business Insider during the road worlds in September, showed the device used to inspect the inside of Kiryienka’s frame for technological fraud: More to come. Click here to refresh this page.