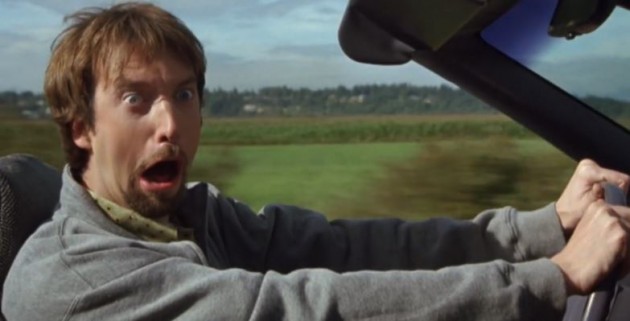 Look, I’m not a perfect citizen myself. I’ve failed to return plenty of things, including a few Netflix DVDs that are collecting dusts somewhere in a desk drawer. But I paid for those mistakes, alright? One guy never did, and now it’s about to pay the price.

A local news outlet in North Carolina, WSOCTV, said a man named James Meyer was arrested in Concord, North Carolina for failing to return the movie “Freddie Got Fingered” after it was rented in 2002. It’s a terrible Tom Green movie, which makes the arrest even more silly. Even worse, WSOCTV said the video rental store, J&J’s Video, is now closed.

Meyer could have probably gotten away with his silly crime had he not been pulled over for a broken tail light. That’s when officers picked up the scent of his video rental sin. “I don’t know how to tell you this but there’s a warrant out for your arrest from 2002,” the arresting officer told Meyer. “Apparently you rented the Tom Green comedy Freddy Got Fingered and never returned it.”

Meyer said he thought the cop was joking – I would, too – but it was the real deal, and Meyer was cuffed on the spot.

I just saw this and I am struggling to believe it is real. https://t.co/GrTXoUj29X

I don’t even know how to believe this story. Heck, Tom Green doesn’t even believe it.

Most video chains, including the Hollywood Video I used to work in, keep a credit card on file to charge you if you never return something. Somehow this really did result in an arrest warrant, though, which WSOCTV provided proof of.

Actor and comedian Tom Green is willing to help out, but Meyer hopes the suit gets dropped.