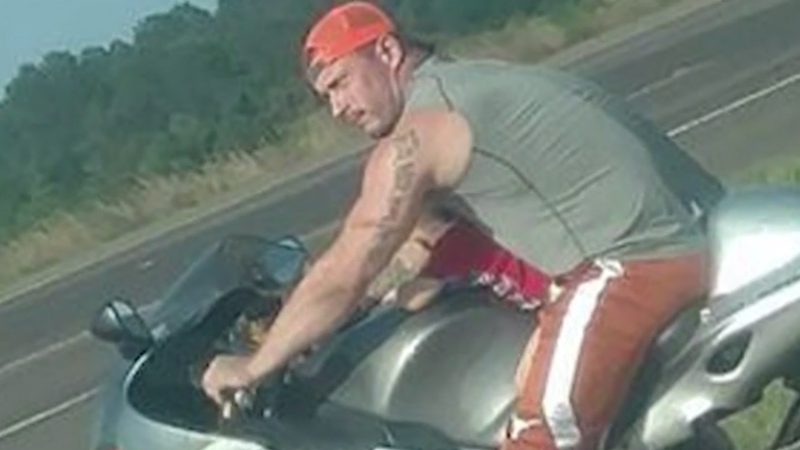 A man allegedly photographed riding a motorcycle with a toddler in his lap not wearing a helmet has been arrested for an unrelated traffic violation in Cleveland, Texas, according to KHOU.

The Liberty County Sheriff’s Office identified the man on the Hayabusa as Anthony Welsh, father of the toddler. The Shefiff’s Office has not charged Welsh with anything concerning the image despite confirming it’s him, though, claiming an officer would have had to have witnessed the incident to issue a ticket.

Welsh was arrested instead for an outstanding traffic warrant on Tuesday, but only after he allegedly got angry at the photo a witness posted on Facebook, from KHOU:

A Liberty County dad said he spotted Welsh leaving a gas station in Cleveland over the weekend. The father was so angry when he saw the toddler that he took a picture and posted it on Facebook. He was hoping someone would recognize Welsh.

“I mean common sense…that baby falls or someone hits that bike on accident that baby’s dead,” said one commenter.

“That’s some hardcore child endangerment right there,” posted another.

Then a man who claimed to be the guy in the photo posted his own comment.

“I seen all of your post an [SIC] got all your threats screen shot so keep talking s—t about me an [SIC] will see how that works for you an [SIC] the one who took this picture it would be in your best interest to take it off…!”

Welsh argued that he stayed close to home when he took his son for a ride in Cleveland.﻿

According to Texas law, children under five are only permitted in a sidecar and any person under 21 has to wear a helmet, though I’d argue that even a five-year-old on the back of a motorcycle is absurdly and unnecessarily dangerous.

Welsh could still be charged for the incident as police continue to investigate and question witnesses. The photo itself and apparent Facebook confession should already be enough to go to town on this asshole.

Be A Better Dad

This Toddler Playing In Microgravity With Dad Is Adorably Awesome