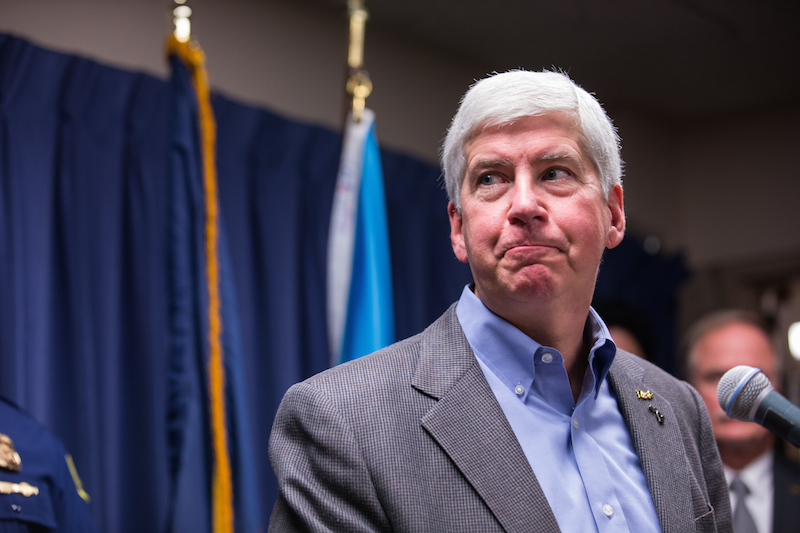 Emails obtained by the Detroit News reveal that top aides to Michigan Governor Rick Snyder were issuing warnings over the water quality in Flint as far back as October 2014—a year before the city switched out its own contaminated water supply and reconnected to Detroit’s.

The emails in question were sent by Valerie Brader, then the governor’s environmental policy adviser, and Mike Gadola, then his chief counsel. The governor himself was not a recipient, but his closest advisers were, including his chief of staff, deputy chief of staff, and communications director. Snyder staffers told the News they did not take their concerns directly to the governor until October 2015, when the water supply was switched.

On October 14 2014, after General Motors said it would stop using Flint water because it was corroding auto parts, Brader advised that Flint reconnect to the Detroit water supply. Gadola concurred, adding a sense of personal urgency—he grew up in Flint, and his mother still lived there, he wrote. From the News:

“To anyone who grew up in Flint as I did, the notion that I would be getting my drinking water from the Flint River is downright scary,” Gadola wrote. “Too bad the (emergency manager) didn’t ask me what I thought, though I’m sure he heard it from plenty of others.”

“Nice to know she’s drinking water with elevated chlorine levels and fecal coliform,” Gadola said. “I agree with Valerie (Brader). They should try to get back on the Detroit system as a stopgap ASAP before this thing gets too far out of control.”

Michigan’s open records law exempts communications from the governor’s office release. Snyder released over 1,000 pages of emails to the News this week, saying that he wanted to increase transparency.

These are the latest in a series of released emails suggesting state and local authorities could have moved more quickly than they did to fix the crisis in Flint. Previously, emails showed that concerned government workers in Flint were given bottled water to drink over a year before it was given to ordinary citizens, and that Snyder’s office knew of a link to between elevated levels of lead in the water and an outbreak of Legionnaire’s Disease much earlier than it previously let on.

Snyder chief of staff Dennis Muchmore told the News that he and other staffers shared Brader and Gadola’s concerns, but that the state Treasury Department deemed a switch back to Detroit’s supply too expensive. “The assessment was you couldn’t do it because it was a cost that should have borne by the system,” he said.