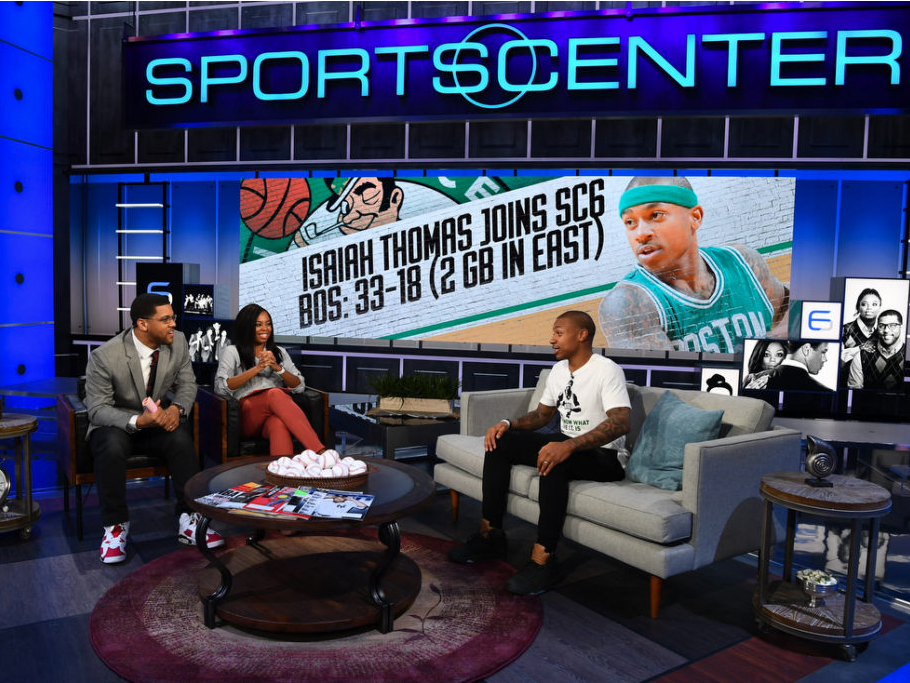 On Wednesday, ESPN announced a brutal round of layoffs, which is expected to hit about 100 employees, including dozens of on-air personalities.

These layoffs are high-profile and painful for ESPN, and on a surface level, seem to validate ESPN naysayers that think the sports giant is in the midst of a slow death march.

But while these layoffs do show that ESPN is dealing with the sting of digital disruption, they don’t mean the business is doomed, according to a recent report by analysts at Morgan Stanley, led by Benjamin Swinburne.

To understand how the layoffs fit into ESPN’s broader strategy, it’s helpful to delve into the two main issues that provoked them. The first is that ESPN has lost millions of subscribers in the last few years, which is putting pressure on the bottom line. The second is that SportsCenter needs to continue to modernize, quickly.

ESPN President John Skipper backed that up view in a memo Wednesday. “Our content strategy — primarily illustrated in recent months by melding distinct, personality-driven SportsCenter TV editions and digital-only efforts with our biggest sub-brand — still needs to go further, faster … and as always, must be efficient and nimble,” Skipper wrote.

Before the rise of the internet, SportsCenter was the undisputed king of sports programming. It set the narratives, and was a must-watch for all the highlight clips you didn’t want to miss.

“It was almost like MTV in the 80s and 90s. It was just one of those special cultural type of media outlets that was almost impossible to replicate,” Bleacher Report CEO Dave Finocchio told Business Insider last year.

But with the internet, highlight clips were online and blogs were churning out takes, sometimes before the game was even finished. SportsCenter had to change or lose relevancy.

And it has changed, especially recently. As Skipper referenced in his memo, ESPN has made an aggressive moves to turn the various SportsCenter offerings into shows with more personality. In sum: There’s less focus on “highlights,” more on “talk show” elements, and a focus on the digital side.

The transition Skipper described in his memo is something SportsCenter can, and will, continue to make, but there will be some hurt along the way, and it may never be the juggernaut it once was.

Millions and millions of losses

SportsCenter hasn’t been the only pain point for ESPN. The other big one has been the major subscriber losses that have persisted for years. According to the latest estimates, ESPN has lost 12 million subscribers in the last six years, a drop of about 12%.

If this trend continues, it will be horrible for ESPN. ESPN makes money from advertising, but also directly gets paid $7.21 each month, per subscriber, for ESPN alone, and $9.06 for the ESPN family of networks. Losing 12 million subscribers hurts — a lot.

But there are reasons to be optimistic looking forward, according to analysts at Morgan Stanley. Why? The primary reason is that Morgan Stanley expects a lot of growth in new online TV bundles, targeted especially at younger viewers (known in the industry as “vMVPDs”). The pitch of many of these services is a lower-cost TV bundle — usually $40 or less for an entry-level package — for a smaller selection of channels you can watch on whatever device you want. A few of these services are already out, like DirecTV Now, Sling TV, Sony’s Vue, and YouTube TV, and there’s a Hulu offering on the horizon.

Morgan Stanley thinks these new services will draw people into the pay-TV ecosystem who either left (cord-cutters) or never had a package (cord-nevers).

This isn’t automatically great news for ESPN. In fact, it could be horrible if ESPN got dropped from some of the low-price bundles because of its high cost. But that hasn’t been the case so far, partially because of the power Disney has at the negotiating table.

“With ESPN included in multiple aggressively-priced video services already in the market or expected to launch soon, the pace and incremental nature of new vMVPD adoption could help improve volume headwinds over the next few years,” Morgan Stanley wrote. These new packages could give ESPN some breathing room on subscribers.

Here’s a good illustration of how Morgan Stanley believes “Gold” (including Disney, Fox, CBS, NBC, and Time Warner) and “Silver (including Discovery, Viacom) network groups will fare over the next few years, in terms of subscribers: That graph shows subscriber trends turning back toward positive.

That doesn’t mean ESPN will get back all those subscribers it lost, but it does mean Morgan Stanley expects “subscriber erosion trends to improve.” And it’s not just good news for ESPN, but for any cable network struggling with subscriber losses.

In all, Morgan Stanley thinks that online bundles will get 3 million subscribers by the end of 2017. Here’s how the analysts think it will break down: If consumers are drawn in by these new bundles, and ESPN continues to have a prominent seat at the table, it could mean a slowing of the massive subscriber losses that have plagued ESPN in recent years. That doesn’t mean there won’t be more layoffs, especially as the business models for making money in places like Snapchat, or on ESPN’s own app, mature, but it will give Disney investors a bit more confidence that ESPN is not in an inevitable decline.

SEE ALSO:Bleacher Report’s CEO explained why ESPN is in trouble

NOW WATCH: We Got An Inside Look At ESPN’s New SportsCenter Studio — And It’s Awesome