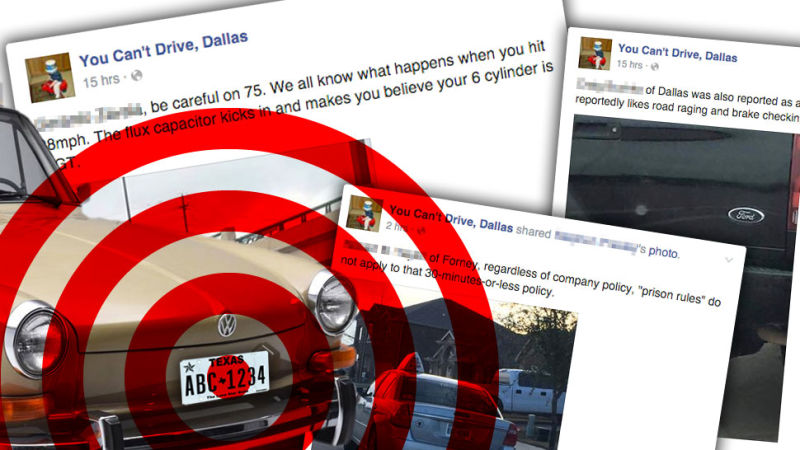 Nobody likes jackasses who don’t use their turn signals, who Tweet or text or twerk or whatever on their phones while driving, or are rude, road-raging reprobates. We get it. That all sucks. Does that mean it’s okay to publish the identities of these drivers online? I don’t know, but these people seem to feel it’s a good idea.

The people I’m talking about are members of a Facebook group called You Can’t Drive, Dallas, and the group describes itself as

We are a group determined to change driving habits around Dallas. Message your photos of offenders and we will expose them!

By “expose them” they seem to mean that they take license plate numbers and then use public records searches to reveal the names of the people associated with that car, which they then usually assume is the driver. Here’s an example, shown in screenshot to the left.

Now, I’ve gone ahead and blurred out the driver’s name, because I’m just not as certain I want to make a person’s name public like that, even if they are a shitty driver. Here, the complaint wasn’t entirely about anything specific, but called the driver out for “driving like an asshat.” They did say he made a turn from the center lane, which is illegal, though.

The admin of the page then posts a screenshot of the driver’s Facebook profile, encouraging people to “say hi.”

Sure, the guy may very well have been driving like a dickhead. It sure sounds like he was. Then again, we don’t know for sure if he was, in fact, the one driving. I mean, it’s his car, but many people legally drive cars that aren’t technically registered to them. Adding in the link to his Facebook page is also unsettling.

There’s lots of this sort of thing on here, with vehicle ownership histories being posted for not using indicators and having some bad lane-changing judgement:

The potential for abuse with this system is considerable, and this shame-cudgel already seems to be wielded with a little too much abandon. Look at these two posts:

Again, I’ve pixellated the names that are clearly legible on the Facebook page. In the one on the left, the person driving is being publicly mentioned for having a brake light out. Or at least the person the car is registered to. In the end, we don’t know exactly if the right person is being Facebook-shamed here.

Why didn’t the person who took the picture, researched the license plate, and posted this online just pull up next to the driver and tell them, hey, your left brake light is out?

Or, if they really, really wanted to involve all of this technology and time in the process, they could have found the person on social media and messaged them privately. This way, is the person even going to know their brake light is out, or is this whole Facebook group just going to shake their heads in disgust and hope the car’s owner, you know, gets the message?

For the post on the right, the person driving the older Camaro is told “don’t romp on that rust bucket any harder, it’s liable to fall apart.” What does this person really know about that car or its condition? Has this person just been publicly mocked because they want to drive an older car? I’m pretty sure that’s not a crime, and many levels of “romping” can be done within the law as well.

And of course, there’s the elephant in the room about the inherent hypocrisy of exposing someone for distracted driving while you take a picture of their license plate with your phone, while also driving.

Legally, your license plate is something that’s publicly visible, yes. And it does seem to be legal, at least in a cloudy way, for non-law-enforcement agencies or people to get access to the names connected to a given license plate. The You Can’t Drive, Dallas group admin uses a website called Publicdata to do his searches.

I asked the admin, Pete Turner, what had inspired him to start the group, and here’s what he said:

When the state began reconstruction of state highway 423, drivers became angry because of the heavy traffic. They began taking their anger out on other motorists. Finally, my wife and children were injured in an accident caused by a young lady speeding and texting and I decided I’d had enough.

I get it. Having your family injured by a moron speeding and texting would make anyone want to take some sort of action to make driving better and safer for everyone. The privacy implications of this do make me leery, though, and I asked him about those:

Here’s the thing, they have NO expectation of privacy with their license plate. Those numbers mean something and it’s an identifier as to who they are.
Theres a reason the state requires your plates to be visible at all time. It’s a public record of who owns that vehicle.

I’m a bit conflicted on this explanation as well. He’s not wrong, that a license plate number is an identifier, but it is an obfuscated identifier; no state requires an owner’s name to be mounted on the car, because who would want that?

I then asked Turner why putting the driver’s name on Facebook is preferable to calling the police, and he said:

We tried that with the knucklehead we had video of and who had been reported 3 times. They said, “if we don’t see it, we can’t do anything.”
which is true, technically, but a good officer would at least go knock on his door. Our site knocks on the door for them. 😉

After talking to this retired cop, I’m sure his intentions are good, and the overall goal is to have a Dallas filled with better, more contentious, more courteous drivers. I’m still not certain that this is the best way to achieve that goal, and I think the potential for abuse or misuse is still very strong.

(An aside about the admin: he was the detective who raided Unique Performance back in 2007.)

The walls are coming down around Dallas-based Unique Performance, maker of the… Read more Read more

The only sure solution is probably one everyone agrees with: let’s all try to drive our best, and to treat everyone well, and then all this crap won’t even be necessary.

But I wouldn’t counsel any breath-holding.