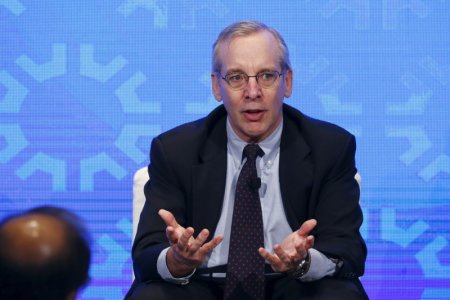 Thomson ReutersNew York Fed President William Dudley takes part in a panel convened to speak about the health of the U.S. economy in New York

(Reuters) – An influential Federal Reserve official on Tuesday said he sees downside risks to his U.S. economic outlook, an assessment that could flag a longer pause before the Fed’s next interest-rate hike than he and his colleagues had earlier signaled.

“At this moment, I judge that the balance of risks to my growth and inflation outlooks may be starting to tilt slightly to the downside,” New York Federal Reserve President William Dudley said in remarks prepared for delivery at a conference in Hangzhou, China sponsored jointly by the People’s Bank of China and the New York Fed.

Although he said he still expects the U.S. economy to grow about 2 percent this year, enough to push unemployment down and begin to pull inflation up to the Fed’s 2-percent target, he added, “on balance, I am somewhat less confident than I was before.”

The Fed raised U.S. interest rates in December for the first time in almost a decade, and signaled that it would probably raise rates four more times this year, a gradual pace by historical standards.

The Fed in December raised its target range for its benchmark policy rate by one quarter of a percentage point, and currently aims to keep the rate between 0.25 percent and 0.5 percent.

The comments Tuesday from Dudley, a close ally of Fed Chair Janet Yellen and a permanent voter on U.S. monetary policy, suggest that the sharp global economic slowdown, stock-market selloff and oil price slide since the beginning of the year may force the Fed to tighten monetary policy even more slowly.

The Fed put markets on notice for just such a possibility in January, saying it needed more time to assess global developments and their affect on the U.S. economy before offering an assessment of the balance of risks to the outlook.

For Dudley, the jury now appears to be in. With turbulence in global financial markets reflecting mixed economic signals, the risks appear to have increased, and though so far he has left his outlook largely unchanged, continued tightening in financial markets “could potentially lead to a more significant downgrade to my outlook.”

Of particular concern, he said, are falling inflation expectations, as tracked both by market pricing and more importantly in his view by surveys of households. While so far the declines are not dangerously large, if they fall further they could make it more difficult for the Fed to bring inflation back up to its goal.

The Fed next meets in mid-March to consider monetary policy, and is widely expected to leave rates unchanged.