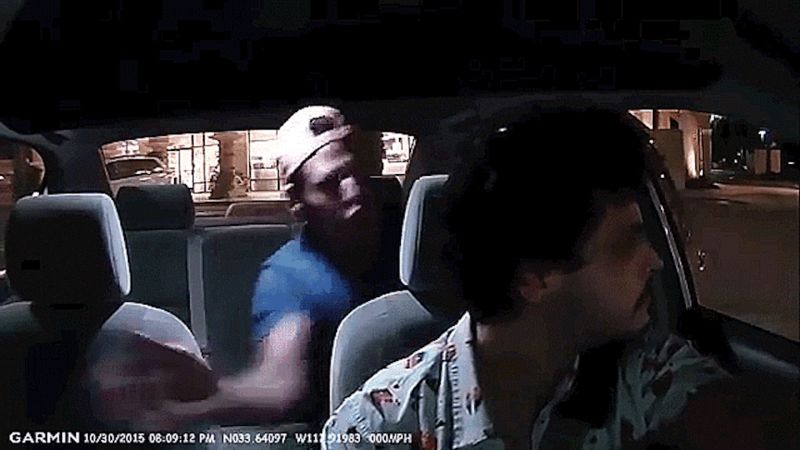 He attacked an Uber driver in a viral video, went to jail on four misdemeanor charges and got fired from his job, but that won’t stop a former Taco Bell executive from suing his driver for $5 million on the grounds that the man illegally recorded the incident.

Yes, you read that one correctly—according to CNBC, the guy who used to be a big-wig executive, Benjamin Golden, wants $5 million out of your everyday Uber driver. You know, the one he beat up. Golden also stated in the court papers that the driver, Edward Caban, is at fault for any injuries he sustained.

The original incident happened on Oct. 30 of last year, when a drunk Golden called upon Uber for a ride in Costa Mesa, California. The driver recorded the confrontation, which is the basis for Golden’s argument—in California, a state statute requires consent of all parties for recordings to be made.

But Caban’s lawyer, Rivers Morrell III, has a different point of view. From CNBC:

“He lost his job because of the video” portion of the record, which showed the violence, Morrell said. The lawyer said the audio portion did not play a role in Golden getting fired.

Legality aside, what the Uber driver caught on tape is a bit shocking. The first part of the video mainly captures banter between the two about an address and a bit of awkward silence, but the driver kicks Golden out at about 3:15 for being too drunk to give directions. That’s when Golden reacts rather poorly:

Since Golden’s case claims that the video was not recorded legally, CNBC reports that his lawyer, Courtney Pilchman, will seek to have the above video barred from evidence in the criminal case against Golden:

Pilchman said that Caban, 23, seems to be “quite the opportunist,” and that “there’s very little truth to the damages that he claims,” which include post-traumatic stress and claims that he lives in fear after his violent confrontation with Golden.

“I don’t believe he has any of those,” she said.

But Golden isn’t just suing the Uber driver in regards to the YouTube video—he will also pursue other unknown persons for disseminating it. From CNBC:

Golden further said in filings that because of the “overwhelming media coverage” of the video, Golden “has suffered severe emotional distress, humiliation, anxiety, fear, pain and suffering and the loss of his job.”

The Uber driver sued Golden back on Nov. 3, and Golden’s lawyers issued an apology for the ordeal the next day. Golden went on air apologizing for it that day, too, repeatedly stating that the video doesn’t show the person he truly is.

Golden, who said he was arrested over three years ago for a DUI, got emotional during the interview, claiming that he didn’t remember the incident and that his “heart sank” upon seeing the footage. At the time, he added that he’d like to talk to the Uber driver. (About getting the $5 million from him?)

Looks like Golden had some time to reevaluate his true feelings about the whole deal after losing his job.