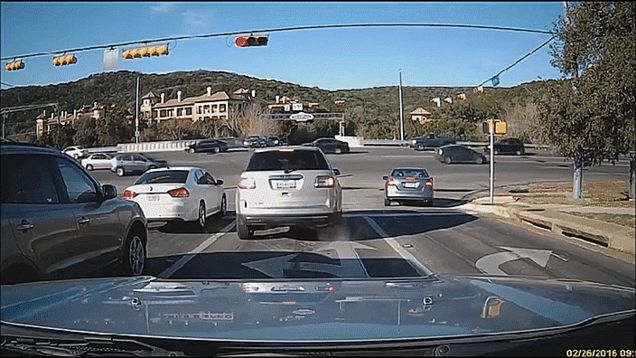 A Texas street resembled a scene from an action movie on Friday, as a gravel truck barreled through a busy intersection—as well as a few cars—and off of an embankment after running a stoplight.

The crash occurred just after rush hour wrapped up in Austin that morning, and local station KVUE reports that cleanup went into the night and the intersection did not fully reopen until around 7 p.m.—a full nine hours later.

According to KVUE, police reported no fatalities from the crash. Here’s the video:

As shown above, a gravel truck enters the picture at what looks to be full speed of the intersection. The truck hit a car waiting at the light, collecting it before entering the cross traffic and hitting a few more vehicles along the way.

Six people did sustain injuries in the accident, and KVUE reports that the truck dropped about 15 to 20 feet into a creek bed after disappearing off of the other side of the road. One of KVUE’s employees, technology director Mike Wenglar, was in the intersection at the time and missed the crash by a narrow margin:

The truck caught fire in the creek bed and KVUE adds that an unidentified person pulled the driver out “just in the knick of time.” Here are a couple of additional videos with footage from the crash and its aftermath:

It remains unclear why the truck driver ran through the intersection, but KVUE added that the incident is under investigation by the Austin police.