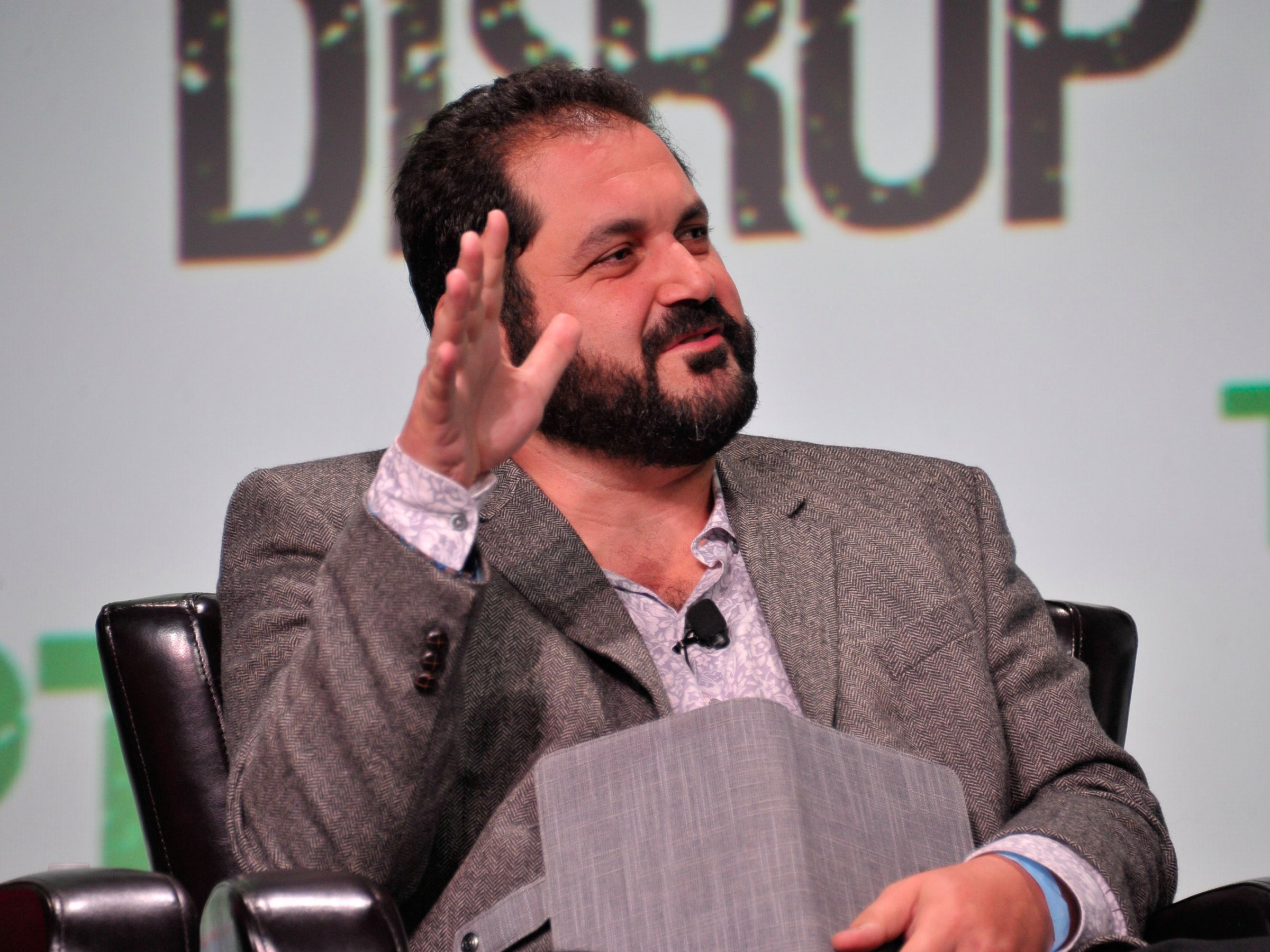 It’s not everyday that the clubby world of venture capital engages in open warfare among investors.

Even less so when the feud involves a 250-word missive laced with fiery language, metaphors and Latin edicts worthy of a Middle-earth battlefield speech, or a roof-shaking sermon … or maybe just an indie-rock song.

But that’s exactly what happened early Wednesday when Uber investor Shervin Pishevar sent out a remarkable statement blasting a faction of Uber’s board of directors.

It’s a heavy piece of writing, extrapolating on eight months of drama at the embattled ride sharing company. Even readers intimately familiar with the saga may struggle to understand all of the letter.

That’s why Business Insider created an annotated version of the letter, decoding some of the thorniest sections and providing all the necessary context and references.

Let us [1] take this pause in this moment [2], when we find ourselves swimming in the crucible [3] of one of the grandest business and moral battles of our generation, and find strength in each stroke of our proverbial digital pens, that we wrote with the indelible, eternal and permanent ink of righteousness. We write with the souls of thousands of lives saved [4], the lives of millions of jobs created [5] liberating multitudes of drivers from the shackles of servitude to iniquitous taxi cartels [6] of corrupt cabals [7] that choked cities with their pollution of air [8]and morals. We write with the spirit of Bonnie Kalanick [9], who raised her son with deep unconditional love and unfading faith in his ability to do good for the world. Whose tragic and untimely death was used against her son at his most vulnerable, unspeakable time of pain [10]. They [11] chose to strike at a moment of a devoted son’s retreat and leave of absence [12] to mourn the absence of the inviolable love of his mother. In doing so, they joined the very corruption her son had devoted such fervent passion to fight. In her memory, we devote our actions to a just cause; to defend what is right and to protect the interest of not only shareholders but most importantly the far more important stakeholders of employees, drivers [13] and customers whose lives have been forever altered by the abiding faith and fervent hard work of Travis Kalanick and the Uber team. Their allegiance was met by this unholy alliance [14] of perfidious greed devolving rapidly into the audacity of vituperative unparalleled predatory rapacity [15].

Let us strike tomorrow [16] with the full and fulsome courage of our convictions. Let our just cause give pause to those who would ever dream of ever emulating the shameful shenanigans [17] of these sanctimonious hypocrites [18] who fling filings [19] and letters de haut en bas [20]; when it is we who have the higher moral ground and our letters [21] and filing will hail down upon their platforms, exposing them as bitterly barren barons of moral turpitude [22]. And as the summer sets [23], we let us be steward of truth who in unison [24] proclaim: fiat justitia ruat caelum [25].

[1] This letter was written by Shervin Pishevar on behalf of the “Uber Shareholder Alliance.” It is not explicit who exactly the letter was sent to, but it’s been reported that he wrote it to his lawyers as an inspirational exercise before the team of brave barristers filed a motion to intervene in Benchmark’s lawsuit against former Uber CEO Travis Kalanick. ↵

[2] The letter was sent Wednesday, August 23, on the eve of Pishevar filing a motion to intervene in the Benchmark lawsuit. The motion, filed in the Court of Chancery of the state of Delaware, was officially on behalf of Stephen Russell and Sofreh LP, where Pishevar is the trustee. ↵

[3] Crucible, noun. Defined by Merriam-Webster as “a severe test” or “a place or situation in which concentrated forces interact to cause or influence change or development.” Swimming in one is generally not advised. ↵

[4] This may be a reference to the notion that Uber gives bar goers an alternative to driving home drunk, though the veracity of the claim remains unsettled. ↵

[5] Uber reports that it has 2 million drivers globally, and more than 600,000 drivers in the US. Drivers are technically considered contractors, not employees. Additionally, the company has 16,000 employees. ↵ [6] Some cities in the US, such as New York City, control the number of taxis allowed on the streets through the sale of “taxi medallions,” to ensure that taxi driving is a lucrative career. Medallions create a barrier to entry in the taxi market, with individual medallions in New York City selling for hundreds of thousands of dollars.

The price of those medallions has decreased as Uber’s ride-hailing service offered a popular alternative for passengers and drivers alike. However, critics argue that breaking the taxi “cartel” has allowed Uber to skirt government regulations to ensure passenger safety, as well as job safety to drivers. ↵

[7] Cabals, noun. Defined by Merriam-Webster as “the contrived schemes of a group of persons secretly united in a plot (as to overturn a government); a group engaged in such schemes.” ↵

[8] Pishevar’s use of this phrase is primarily rhetorical, rather than a matter of fact. Taxicabs and ridesharing apps like Uber both reduce individuals’ reliance on personal automobiles, but it’s not clear that one is more eco-friendly than the other. While Uber’s original pitch in 2008 emphasized the company’s use of fuel-efficient vehicles, many of Uber’s drivers use their own cars of varying fuel economy. Concurrently, cities like New York City have increased their fleet of hybrid vehicles. ↵

[9] Bonnie Kalanick was the mother of Travis Kalanick. She died in a boating accident near Fresno, California, on May 26, 2017. She was 71. Her husband, Donald Kalanick, was injured in the accident but suffered only moderate injuries. ↵

[10] Bonnie’s death followed months of controversy at Uber, primarily around concerns of a toxic culture and sexist work environment at the company. The Holder Report — an investigation into Uber’s workplace led by former US Attorney General Eric Holder — was set to come out in late May but got delayed until June. ↵

[11] The other side in this fight, consisting of Benchmark and others. See footnote 14. ↵

[12] Kalanick took a leave of absence in mid-June, before resigning on June 21. ↵ [13] One of Uber’s more controversial positions is that it considers its drivers separate from its employees. While paid by Uber, the company considers drivers to be “contractors.” This stance has been challenged globally to varying ends by both lawmakers and litigators. ↵

[14] The phrase “unholy alliance” reportedly first came into use around 1855 in reference to western European alliances with the Ottoman Empire.

In this case, Pishevar is likely referring to alliances on the Uber board of directors, who were split on how to proceed with the issue of a new CEO. Team Benchmark was led by Matt Cohler, an early Facebook executive and a partner at Benchmark. As of last week, Cohler was allied with Ryan Graves, the first CEO of Uber. Several wild cards in the bunch swayed between team Benchmark and team Kalanick on an issue-by-issue basis. ↵

[15] Arguably one of the most quoted lines in Pishevar’s already-famous proclamation, and for good reason. Pishevar unleashes a veritable firestorm of linguistic missiles on his foes.

[17] These unspecified shenanigans likely go beyond the Benchmark lawsuit to include Pishevar’s allegations that Benchmark intentionally leaked information in order to take over the board. ↵

[18] The phrase “sanctimonious hypocrites” is technically redundant. Sanctimonious is defined by Merriam-Webster as “hypocritically pious or devout.”

This likely refers to Benchmark’s allegations that Kalanick behaved fraudulently for his own gain, in conjunction with Pishevar’s belief that Benchmark too acted in its own interest by leaking information about Uber. ↵

[19] Presumably a reference to the legal filings in Benchmark Capital Partners vs. Travis Kalanick and Uber Technologies, Inc. Case number 2017-0575. Filed in the Court of the Chancery of the state of Delaware on Aug. 10, 2017. Benchmark sued Kalanick on August 10, claiming that he fraudulently added three additional board seats in June 2016. Kalanick took one of the empty board seats when he resigned as CEO in June 2017, and Benchmark hopes the lawsuit will lead to Kalanick’s removal from the board. ↵

[20] From French, meaning “from on high to low.” Used in English to mean “with condescension.” ↵

[21] Pishevar is a fan of letters — this one included. One such letter is the one he sent to Uber last Thursday, informing the board that he would intervene in Benchmark’s lawsuit. ↵ [22] Here Pishevar displays impressive dexterity wielding a classic homophone. The contrast between a title of foreign nobility and an adjective that conveys infertility is punctuated by the wise choice of “turpitude,” a word derived from Middle French to signify depravity. ↵

[25] Fiat justitia ruat cælum is a legal phrase of Latin origin. It means, “Let justice be done though the heavens fall.” Here Pishevar uses it to signify his stance that justice must be served regardless of the consequences. ↵