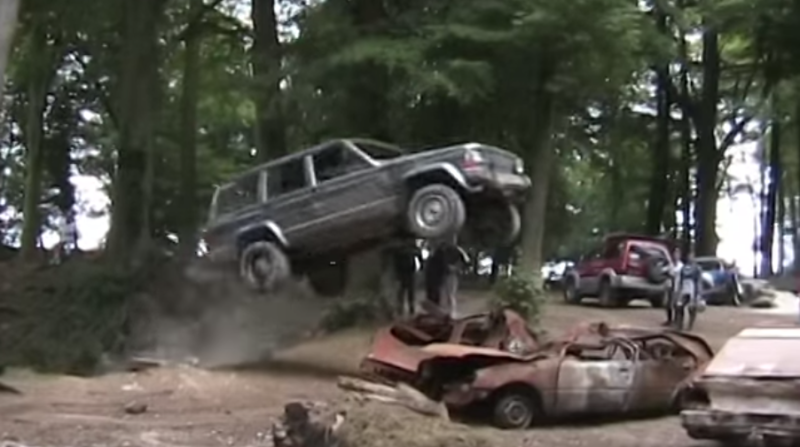 What does it take to kill off one of the most robust, reliable, unstoppable SUVs ever built? Lots of ridiculously hard-core off-road hoonage, that’s what.

High quality off-road buffoonery is always fresh, especially when it involves a bunch of Brits trying their hardest to put an end to one of the trustiest engines of all time, Jeep’s 4.0-liter inline-six. So watch this not-particularly-new video and witness that legendary engine fight hard for its life:

The YouTuber Matt Ellison says in the video description that this particular Cherokee had failed inspection, and that repairing a vehicle worth as little as a mid-’90s XJ didn’t make financial sense. So he figured he’d let the XJ leave this world in a blaze of glory. His description reads:

We had used this Jeep over the years to build MX and MTB trails, pulling logs, moving equipment etc. In that time it had performed admirably, BUT! Rust, electrical and mechanical problems and the rear door being ripped off (accident with a tree meant that it failed its MOT (Ministry Of Transport test for car safety). Cost of repairs far exceeded that of another decent one .

So ! we decided to give it the send of it deserved.

He goes on, describing the rust problem plaguing his Jeep (and also many other Cherokees, as I’ve found out):

I see a lot of angry posts a long the lines of “why would they wreck a perfectly good Jeep !! I would have fixed it, retards !!!”….. The thing was “FUCKED !!!!!!”, it was so rotten underneath you could have pedalled along with your feet. Also keep in mind this is the UK, the value of a second hand Jeep is as little as $300.﻿﻿

I had a similar plan of sending my XJ out with a bang in Moab, but the thing just kept on running and tackling trails like a boss, so I gave up and just drove it home.

I guess I need to take more jumps next time.