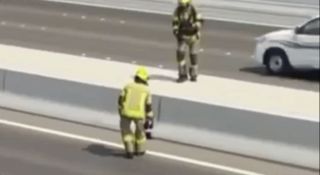 If this was a different life, and I worked as an emergency responder, here is the kind of report that would easily send me dashing out the door: A tiny, adorable kitten, stuck on the highway. The kitten can’t escape because of traffic congestion. That exact situation played out in Abu Dhabi this week.

As recounted by the Khaleej Times, the terrified, adorable, tiny kitten had to be rescued by four firefighters. After receiving reports of a cat stranded on the highway emergency workers did the only thing they could do. Close down the highway, duh. From the Khaleej Times:

Colonel [Mohammed Abdul Jalil] Ansari pointed out that the Civil Defense and the traffic patrols, were eventually able to stop the street traffic, while maintaining the safety on the roads and rescued the frightened kitten, later on.

The Civil Defense said that the teams deal with similar incidents continuously in the UAE, and take both humanitarian and animal welfare seriously.

Damn straight. You see the cat, save the cat.

Cats In Cars Getting Comfy

The Cat Is In The Truck