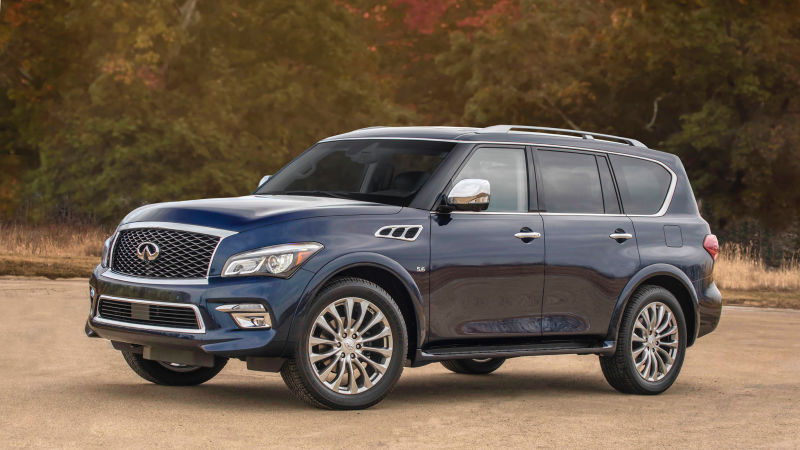 If you’re shopping for a luxury SUV, you might have already laughed the Infiniti QX80 off your list because look at it. But behind that cyborg-beastface is a capable and seriously comfortable 4×4. If that got your attention, here’s everything you need to know about it in our Ultimate Buyer’s Guide.

The QX80 is an Americanized and luxuriated rendition of the Nissan Patrol. It’s not a lifted Pathfinder or a stretched Xterra; the Patrol/QX80 is its own animal with a classic truck-style body-on-frame build, a V8, and a true low-range 4WD system.

There aren’t a lot of options; Infiniti basically lets you choose between a competitively priced basic-spec luxury SUV and a very expensive Limited trim. The basic vehicle is nice, the Limited is downright sublime inside despite being a little overdecorated.

Nissan’s prolific 5.6 liter V8 is the only engine option, set to sneeze out 400 horsepower. Some have said that’s not enough to push almost three tons of SUV down the road, but they obviously haven’t driven a QX80.

Infiniti’s mighty 4×4 doesn’t suck your guts out the back window but it’s got more than enough juice to aggressively merge and keep charging right on past whoever’s hogging the fast lane.

Give yourself a little time to reel it back in though; stopping power is adequate but not exceptional. You can only fight physics so far.

The same could be said for body roll, though looking at one of these new-school conestoga wagons you’d think a good breeze would be enough to flip it over. Not the case. The vehicle stays surprisingly well planted given its proportions as long as it’s driven within realistic limits.

All those aspects of the QX80 experience are ancillary of course, but the materials inside would be nice enough to distract you from even a pretty mediocre driving experience.

Once you accept the strange oblong-roundness of everything you come to love the softness of the seat and steering wheel. Oh that wheel; to grip it is an indulgence of luxury unparalleled. An optimal girth, just the right response to squeezing and a well-balanced weight to the front wheels that pull the car.

The second generation Infiniti QX debuted as a QX56 at the 2010 New York Auto Show. All-new for 2011, the Big-Bertha strayed from its Nissan Armada-based roots and was built on an all-new platform with a new frame and new body, which promised more stiffness and better NVH.

With the exception of a new Signature addition trim, of which only 1,000 will be produced, 2016 saw few changes to the QX80.

Infiniti offers only one engine on their humongous luxury SUV: a 5.6-liter direct-injected V8 with variable valve lift spewing out 400 horsepower and 413 lb-ft of torque.

That horsepower is managed through a seven-speed automatic transmission and, on four wheel drive models, a two-speed transfer case.

The QX80 can be optioned to weigh nearly three tons, so it’s no surprise that it doesn’t exactly sip fuel. Scoring only 20 MPG highway in two-wheel drive form, the Infiniti is a heavier drinker than competition from Lincoln and Cadillac (they both score 22 MPG highway).

Still, people who drop 70 grand on a giant luxury SUV could probably stand to spend a few more bucks at the fuel pump.

The Infiniti QX80 comes in three main trims: QX80, QX80 Signature Edition and QX80 Limited. The base QX80 and QX80 signature Edition trims can be had in either rear or all-wheel drive, while the QX80 Limited sends power to all four wheels as standard. All trims double wishbone suspensions and 13.78-inch vented rotors at all corners as well as hydraulic power steering.

The QX80’s value proposition is an interesting one. Since you’re almost definitely going to buy the four-wheel driving version say it starts at $70,000. The almost $20,000 leap to the limited seems downright absurd. You could buy a fantastic boat to pull with your base-model QX80 for that kind of cash.

And yet when compared the most likely competitor in the $90,000 SUV strata, the Cadillac Escalade, the QX80 Limited holds up extremely well on the only category that matters here; comfort.

But back again; if you’re the type to justify a $20,000 price hike for a little more luxury what are you doing buying an Infiniti?

Get the base, buy the boat, and beep at your neighbor polishing his Escalade.

[Build Your Own Infiniti QX80]