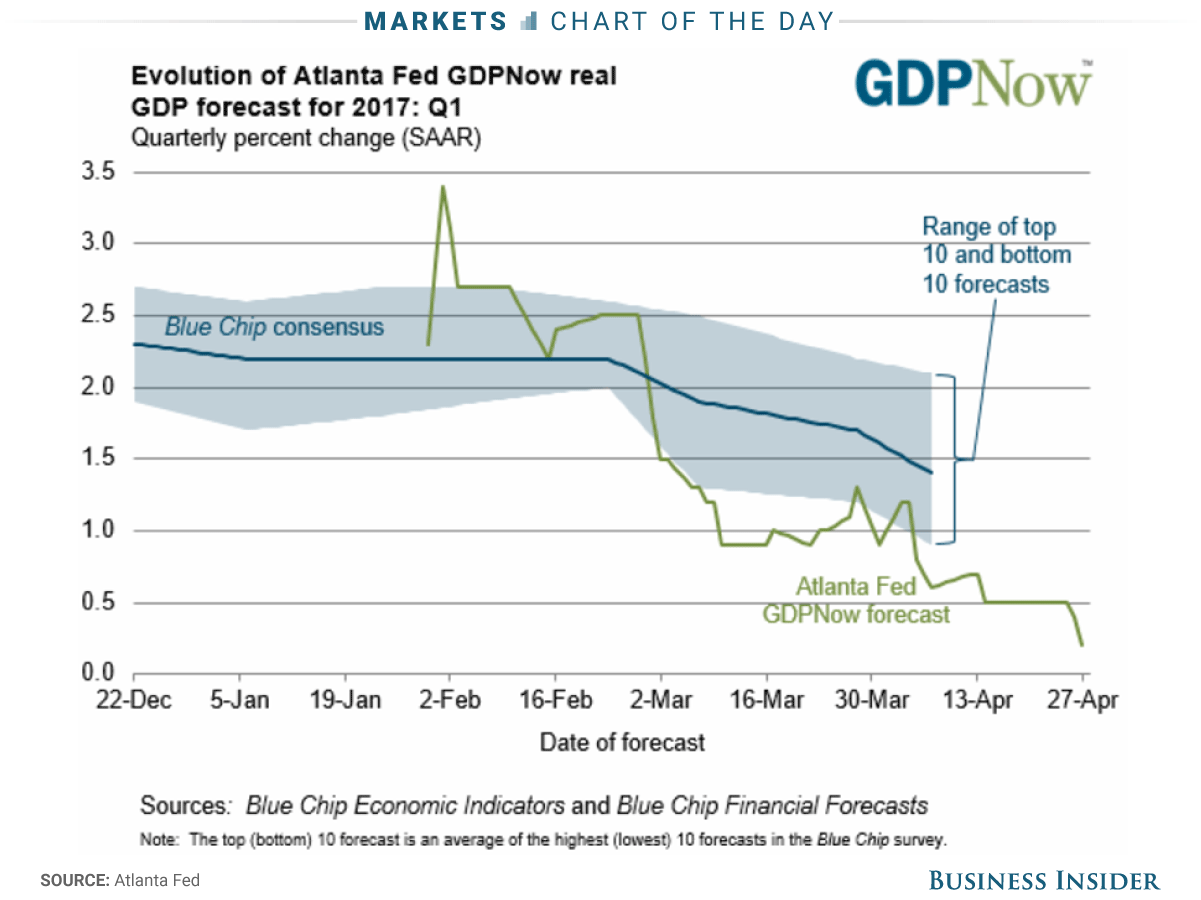 The Department of Commerce will publish its first estimate of US economic growth in the first quarter of 2017 on Friday, and it may show that the economy barely grew at all.

The Atlanta Fed’s widely followed GDPNow tracker, which aggregates model forecasts for several subcomponents of GDP like exports and homebuilding, fell to an all-time low of 0.2% for the first quarter.

Economists surveyed by Bloomberg are more optimistic, forecasting that gross domestic product increased at an annual rate of 1%.

In a post on Thursday, the Atlanta Fed said its model fell from 0.5% after Wednesday’s annual retail trade revision dimmed the outlook for consumer spending in the first quarter. Spending is the biggest contributor to economic growth. Consumer spending appeared to have cooled in the first quarter based on weaker-than-expected data released earlier. Consumer spending adjusted for inflation saw its weakest February since 2009. A slowdown in the auto industry weighed on retail sales in March, the latest month of data available that marked a second-straight decline.

Also, a delay in tax filings, as well as new measures to combat fraud, meant that many Americans received their tax refunds later than usual. Economists expect that some of the spending with tax-refund money is likely to be pushed out into the second quarter.

The expected slowdown in GDP growth is likely to further expose the divide between hard data that tracks output and soft data that reflects sentiment. Surveys of consumer and business confidence rose to new highs after the election, but actual spending and investment have not increased at the same pace.

On Wednesday, the Trump administration unveiled a tax plan that Wall Street has been anticipating would boost spending and investment. Short on details and far from implementation, the one-page plan would lower the US corporate tax rate to one of the lowest in the developed world.

The GDP release on Friday may show that President Trump’s promise to return the economy to 3% growth is far-reaching. Many experts outside the White House are skeptical of the promise because worker productivity remains sluggish.

The data comes with a few important caveats. The Bureau of Economic Analysis will revise the GDP print two more times over the next two months, and release annual revisions next July that could show the quarter was not as weak as initially reported.

In addition, the first quarter has consistently been the softest of the year since 2010. That’s partly because winter complicates the seasonal adjustments that go into the data.

“We expect faster growth in subsequent quarters to help compensate for the slow start to the year, but we only anticipate full-year 2017 real GDP growth of 2.1%,” said Sam Bullard, a senior economist at Wells Fargo.