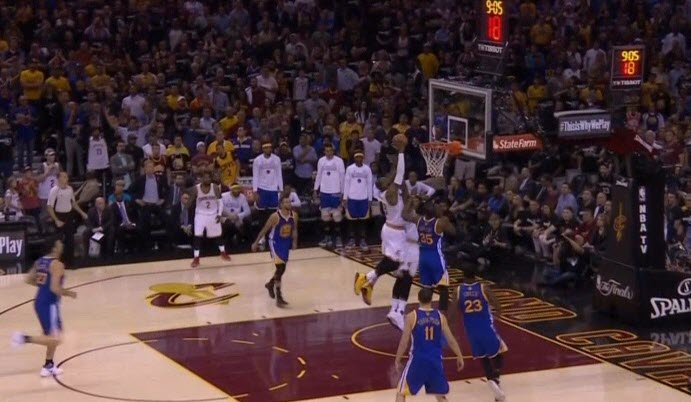 Down 3-0 to the Golden State Warriors, the Cleveland Cavaliers needed to defend home court to avoid getting swept in the NBA Finals.

The Cavs stars answered the call, with LeBron James providing a triple-double and Kyrie adding on 40 points to support the cause.

As an exclamation point on the night, LeBron threw a pass to himself off the backboard, finishing with a dunk that can best be described as “vicious.” You can watch the play below.

After the play, Jeff Van Gundy and company in the booth couldn’t decide if the play should count as an assist or a rebound. Personally, I say both.

The Cavs still have a long way to go to make this a series. As good as they looked tonight, Game 5 takes the teams back to Golden State where the Cavs have already lost twice by double digits. That said, right now the Warriors hold a 3-1 lead in The Finals.

And we all know how that story ends.

Game 5 tips off in Golden State at 9 p.m. Monday night on ABC.