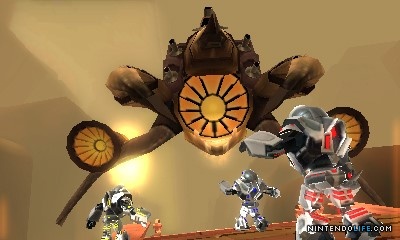 Still upset about Metroid Prime: Federation Force? Well, this footage isn’t going to help. I’ve never jumped on board the hate train for this game, waiting to see and feel it in action before making my judgement, but straight gameplay doesn’t sell the title nearly as well as a Nintendo trailer does. The Nintendo Direct made this game look like a blast to swing in those players on the fence, but I can definitely see how this game can get bogged down in between the fun parts.

Again, I don’t “hate” this because it’s not a traditional Metroid; however, a clearer picture of the reality of this game doesn’t necessarily make me love it, either.

With that said, I really dig the “John Williams” combat music. Nintendo might as well have lifted it from Star Wars, and while it definitely wouldn’t work in a normal Metroid game, I’m fine with it here.

It’s still on my radar, mostly because I am still convinced Nintendo is not far off with a full-blown Metroid Prime, but I’m approaching it with cautious optimism. The game will release this year for the Nintendo 3DS.