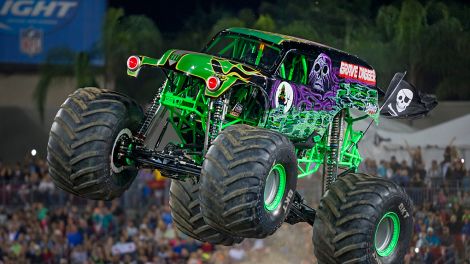 No matter what preconceived notions you have about it being for little kids or whatever, Monster Jam is cool. And if it weren’t cool enough already, a driver landed a front flip in a monster truck on Saturday night.

The driver in the video above is Lee O’Donnell, who landed the first-ever front flip in Monster Jam competition during the Monster Jam World Finals at Sam Boyd Stadium in Las Vegas. The “Mad Scientist”—he’s mad alright!—floored it to get airborne and pull off a front flip. The crowd in the camera shot absolutely went wild during the two seconds of video that they’re shown in.

Really, in what universe is it possible to send some huge truck spinning into a front flip? What population produces people who will get into a truck and think the illogical thoughts of, “I’m going to run into a mound of dirt and flip this thing?” This universe and this population, despite all odds and the basic concept of gravity. Maybe there truly is hope for this world.

O’Donnell won the freestyle championship at the competition—his first—because really, who can top the performance of a person who pulled this off?

The Story Behind Grave Digger, The Monster Truck Everybody’s Heard Of