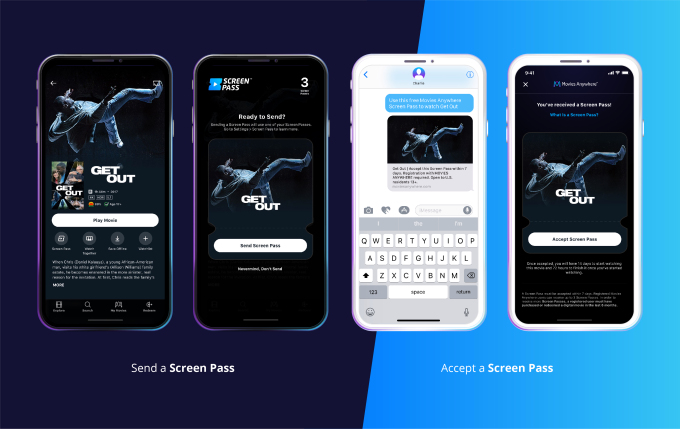 Digital locker service Movies Anywhere is today officially launching its movie-sharing feature dubbed “Screen Pass,” which lets you lend out one of your purchased movies to a friend or family member. The feature was rushed into beta testing this March, followed by a more open public beta trial in April, thanks to increased demand from consumers stuck at home during coronavirus government lockdowns.

The Movies Anywhere app today allows customers centralized access their purchased movies from across a number of services, including iTunes, Vudu, Prime Video, YouTube, Xfinity and many others.

Today, the app is jointly operated by Disney, Universal, WB, Sony Pictures and 20th Century Fox. The product itself had evolved from a 2014 version known as Disney Movies Anywhere, but later migrated to a new platform in 2017. The app was also rebuilt to accommodate an expanded group of operating partners, rebranded, and now operates as a different business than it did in years past.

In April, Movies Anywhere reported over 6,000 of the titles in its app were Screen Pass-eligible. Since then, it’s added 500 more movies to the collection, including Who Framed Roger Rabbit, A Star Is Born Encore, The Muppets, and National Treasure. With the additions, over 80% of its library titles can be shared through the new feature. 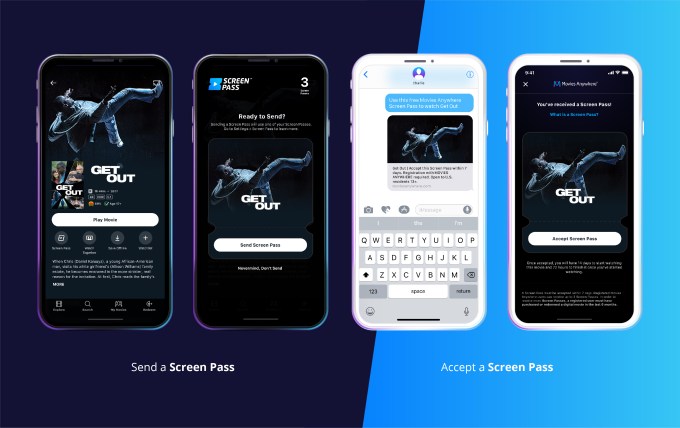 To share a title, you’ll click the Screen Pass icon on the title and enter the details, like the recipient’s information. Shared movies can be sent out over text, email or a message to the recipient who has a week to accept. The shared movie then works like a digital movie rental, for the most part, as the viewer will have up to 14 days to watch and up to 72 hours to compete viewing after the movie has been started. But unlike rentals, the recipient doesn’t have to pay to watch — it’s free to both share and watch.

The company says early data from Screen Pass beta tests indicated the feature has the potential to drive new acquisitions and purchases.

45% of senders shared a movie using Screen Pass because someone else had first shared a movie with them. 30% of those who received a shared movie were new to the Movies Anywhere platform. A small number of movies drove around 9% of total shares, including Ready Player One, The Prestige, Tombstone, The Mule, Bad Times at El Royale, and Jaws. This data indicates that Screen Pass shares weren’t limited to newer titles, as one may expect, but also included older classics.

In addition, around half of sharers (53%) chose the movie they were lending, versus 47% who let the recipient choose. But this could be due to how the Screen Pass beta test was structured, as recipients would be opted into the beta test by accepting a share from another member. It’s likely that some portion of the early group was simply inviting their friends by sharing a title with them.

In addition to Screen Pass sharing, Movies Anywhere also recently introduced a co-viewing feature called Watch Together which offers a synced viewing experience with up to 9 other people. This product works via Screen Pass, and competes with a variety of solutions that emerged or grew in popularity amid the pandemic, including those from Hulu, Amazon, and third-parties like Scener and Netflix Party, among others.

Screen Pass is launching today to all Movies Anywhere customers in the U.S. The Movies Anywhere app works across a range of devices, including iOS and Android mobile, Apple TV, Roku, Kindle Fire, Amazon Fire TV, Chromecast, and LG and Vizio smart TVs.