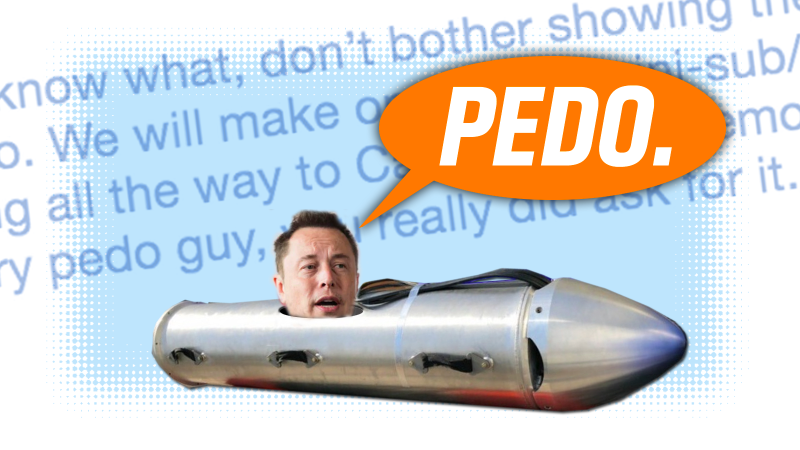 The internet, and the astounding degree of personal connection it gives to all of us, is absolutely incredible. But at the same time, it makes me nostalgic for the days when we had to wait for our heroes to die and bitter tell-all books to be published to find out what pieces of shit they were.

We live in an era now where the shitty thoughts of the great and powerful are broadcast out to the world on a whim, instead of being delivered, with equal parts vitriol and airborne spittle, to some spirit-dead assistant. If you doubt this, just look at what went down with Elon Musk this weekend.

By “what went down,” I mean the stuff where Elon Musk called a child-rescuing hero a pedophile because he was upset that a half-ass submarine idea he had was useless.

In case you missed it, I better explain: I’m sure you recall that a dozen boys from a Thai kid’s soccer team and their coach were trapped in a flooded cave complex. Everyone was rescued, via heroic efforts of many divers, and, notably, zero actual help from Elon Musk, the man behind both Telsa and SpaceX, and the non-Robert Downey Jr. human most likely to be thought of as Iron Man.

That’s not to say Elon didn’t try to help, sort of.

Well over a week after the rescue operation had been planned and started by experts on the scene, someone tweeted at Musk to suggest that, for some reason, he should get involved.

It started out OK, but things snowballed and soon Elon had his team build a rigid, tube-like “submarine” from some repurposed rocket liquid oxygen transfer tubes. The sub was built and tested in environments quite different from the Thai cave complex, and was sent over with Elon and a team to see if it would be useful for the rescue in Thailand.

The rigid nature of the tube, and the small size and constricted passages of the cave complex made the sub “not practical for this mission,” according to what rescue chief Narongsak Osatanakorn told the BBC. In fact, it was generally agreed that the sub was useless, leading to this assessment by British diver Vernon Unsworth, who was one of the divers who actually rescued the boys:

Sure, telling anyone to stick a submarine in places that hurt is never the genteel thing to do, but this is a guy who actually knows what he’s talking about, and was directly involved in the rescue. At this point, a hypothetical alternate universe Elon Musk that was actually a decent human being would have just chuckled, been happy that all the kids were rescued, reminded himself that no matter how smart you are, reality is complicated, and moved on to try to build electric cars right and launch things into space.

But that’s not the universe we’re stuck in. In our shitty universe, Grimes’ boyfriend tweeted this in response to Unsworth’s criticism:

…and this is the point at which, for me and many other people, any benefit of the doubt we’d been willing to give Musk broke. Elon Musk called a guy who risked his life to rescue trapped children a “pedo” based on no evidence beyond that fact he lives in Thailand and he pointed out that Elon’s sub was a useless piece of shit.

In no way did Unsworth “really did ask for it,” whatever the hell “it” is in this context. I guess “it” is the absolutely ridiculous yet technically sophisticated plan, using a global network of computing devices, by which Elon Musk somehow made a solved crisis involving little kids he never met into something about him.

Elon could have stopped at any time here; all the blowback and shit he’s getting is absolutely, 100 percent his own fault. And it’s all baffling. What happened to Elon Musk? How can someone be so accomplished, so successful, so adored by so many people and yet still be so wildly, uncontrollably insecure that any amount of entirely reasonable criticism triggers a response like this?

It leads one to wonder what exactly the fuck is his problem.

To be fair, it’s not just his problem; it’s indicative of a whole stupid culture built around him and people like him, a culture that elevates smart rich guys like Elon to such an unrealistic level of ardor that they become insufferable dipshits, ready to call an actual, proven hero possibly the worst thing you can accuse someone of being, all because his stupid idea no one asked for in the first place didn’t work.

Elon’s many fans/cultists are, unshockingly, just making everything worse. They meet any criticism of Musk (in this case, about another issue) with responses like this, to our colleague over at Splinter, Libby Watson:

Besides, don’t let anyone tell you you can’t criticize someone for doing something if you’ve not done it. Ever said anything bad about a government policy? Where’s the nation you run, fucko? Ever said you don’t like a vegetable? Where’s your entire ecosystem capable of producing a miracle like cauliflower, bitch? See? It just doesn’t work. You don’t have to have made a movie to criticize a movie, because while having direct knowledge of how daunting a given task can be is worthwhile, it doesn’t mean that people can’t tell if the end product just, you know, sucks.

Also, keep in mind that, when it comes to actually helping those kids escape from that flooded cave, Elon Musk provided exactly as much help as I did. Or, provided you’re not one of the divers or other workers out there in Thailand, you did. Get yourself a beer, hero.

Which brings us back to this whole “pedo” accusation thing. Any way you look at it, it suggests a person who, perhaps quite deeply, sucks. For someone who sure seems like a genius a lot of the time, it’s a breathtakingly stupid thing to do, baselessly accusing a child-rescurer of being a pedophile, even more so when you’re an incredibly famous public figure, and CEO of a publicly-traded company.

What the fuck did he think would happen? That this would play out just great? That the world would rise up and say, bravo, Elon, for having the guts to call that man who saved some kids a kid-diddler, just because he made your ego’s tenders hurt? Think before you tweet, dummy, is a lesson we can all take to heart, but especially Elon.

To bring this all back to the only subject that really matters, cars, is this embarrassing debacle the thing that’s going to make Elon Musk more of a liability than an asset in the minds of Tesla’s board? How much easier would the lives of Tesla’s PR staff be if Elon, you know, just shut his data-hole sometimes?

Even from a cynical financial standpoint, Tesla’s share price is down today almost three percent as of this writing.

Regardless of the (nontrivial) issues Tesla has, they’ve also managed to make electric cars a desirable thing to have, after decades of associations with golf carts and all the sexiness and appeal of a pair of prescription shoe insoles. Tesla designs some excellent vehicles, and there’s no question they’ve changed the automotive market.

So why do the people at Tesla need to be inexorably associated with some petulant asshole who manages to drag the company into the news over and over again for reasons that will, I’m pretty sure, not sell any damn cars?

I suspect many of them are thinking maybe they don’t.

Elon’s fans will no doubt defend him as always, and that’s fine. But we shouldn’t be taken in by the idea that, somehow, Musk is some superhuman altruist, a techno-messiah come to solve the world’s problems. It’s not true, and it’s never been true. Elon Musk is a person, like all of us, very good at certain things, but fundamentally looking out for himself. He’s not a messiah. If you’re confused still, the events of this past weekend should be very helpful for you. Would a messiah or an asshole call a guy who rescues kids a pedophile?

You don’t have to be an Elon Musk to answer that question.