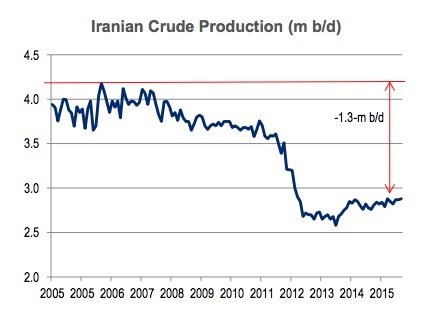 Oil prices crashed to their lowest level since 2003 and are more than 70% lower than they were in June 2014 after sliding below $30 per barrel.

And according to investment banks HSBC and Citi, it’s unlikely prices are going to move that much higher over the next year, even though US sanctions have been lifted and Iran’s oil supply will hit the market.

The BBC reported HSBC chief executive Stuart Gulliver saying at a forum in Hong Kong that “oil will probably settle at between $25 and $40 in a year’s time.”

“Major producers are currently delivering 2-2.5 million barrels per day more than demand, so the question is how long they can continue to overproduce for at that level,” he said. The Nymex crude oil price is at $29.95 per barrel as of 8.15 a.m. GMT and Brent is at $28.46 per barrel. This is because US President Barack Obama lifted sanctions on Iran which means the oil producing country will unleash potentially millions of barrels of oil onto the market again.

However, according to Citi’s global head of commodities Edward L. Morse in his latest research note, oil prices will move up but not as rapidly as the market may think. He forecasts the average oil price to settle around $51 per barrel for Nymex oil and $48 for brent this year.

This is a far cry from the triple digit highs of the summer of 2014.

This is why Iran won’t make a bigger support function for oil prices (emphasis ours):

Oil in floating storage is >40-m bbls (though <40% is thought to be crude), with similar volumes on Kharg Island which could hit crude markets within 1-2 months.

Citi discounts the likelihood of Iran adding 1-m b/d of incremental supply within one year, but a sustained production increase of 300-500-k b/d is also expected, still ~800-k b/d below mid-2000s output. This will head to both Europe and Asia, where the fight for market share is already fierce between Saudi Arabia, Russia and Iraq.