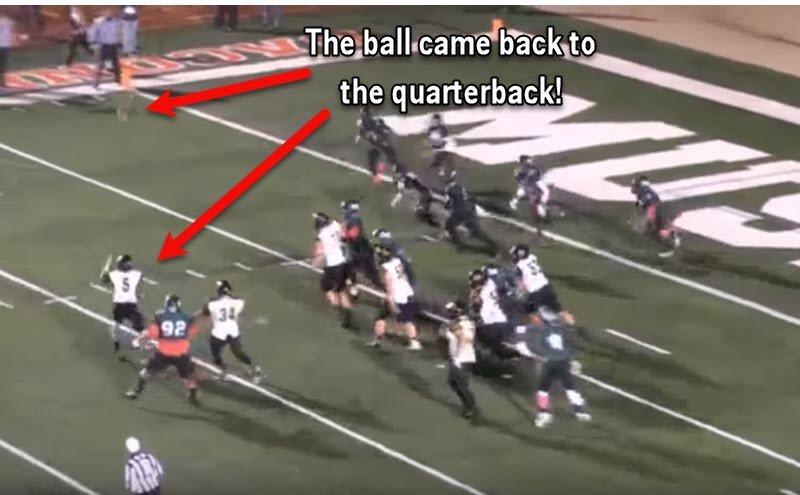 On Thursday night, an Oklahoma high school team won a game with a two-point conversion in the final seconds that included the quarterback completing a pass to himself, a lateral, and a defender helping a runner juke five other defenders.

The wackiness started when Sand Springs, in the white jerseys, scored a touchdown with six seconds to play, as detailed by NewsOK.com. That made the score 25-24 (ignore the score on the screen below, it had not been updated.) Rather than go for an extra point and force overtime, the team elected to go for two and the win.

Sand Springs quarterback Hunter Greathouse took the snap and tried to throw to a wide receiver on a quick slant. However, the ball was batted straight up into the air. Amazingly, the ball came back down to Greathouse, who was able to catch it despite being hit by a defender.

Greathouse reversed field, ran back to the 25-yard line, and headed toward the other side of the field.

In all this confusion, it would be easy for any quarterback to forget that he can’t throw another pass. But Greathouse kept his cool, started to run upfield before running into a dead end. He threw a lateral to a teammate.

Wide receiver Josh Taber then took the ball and started to move back, toward the middle of the field.

Taber had about seven defenders he needed to beat, and not a lot of blocking help. The first hit came from a defensive lineman. Amazingly, that helped propel Taber into the end zone for the winning score.

Here’s that hit again in slow motion. It actually caused Taber to juke five other defenders.