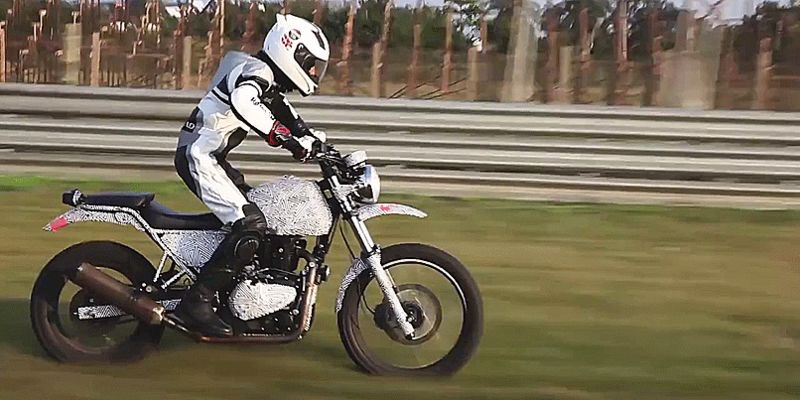 Royal Enfield is India’s main motorcycle brand. It’s known for cute quirks like odd shifter placement and reliably falling apart. But the slick-looking manageably-sized on-road/off-road Himalayan might be worth overlooking some shortcomings for.

The company’s website doesn’t appear to be working as I write this (ha!) but if it were, I believe it would tell us their new 500cc motorcycles cost around $5,000. Of course by new I mean “new” because they rely on a lot of archaic (or if you prefer, “simplistic”) technology.

This has kept prices down and maintained the brand’s appeal to India’s mass-market, where motorcycles are extremely prolific and and Royal Enfields are so common getting parts is as easy as haggling at a fruit stand. So I’m told.

Specifics on the Himalayan are scarce, but reports from around the internet are saying the bike will be powered by a 410cc single-cylinder oil-cooled four-stroke engine, which would be in line with the company’s ethos of “basic.”

The bike will have a four gallon fuel tank (enough to give an engine that size respectable range) and burp out around 28 horsepower.

Important things like price, weight, true dimensions and even American market availability are still unclear but Royal Enfield has launched a very pretty website dedicated to helping you understand what the Himalayan is supposed to feel like.

And if that link’s still not working by the time you read this, here’s the idea:

Speaking of ideas, I’m thrilled at the prospect of a basic sub-500cc motorcycle that could carry me and gear or a passenger anywhere I want. I’m six-foot-scrawny, and my ’81 Suzuki 450 was (dimensionally) the best thing I’ve ridden to this day. And since Royal Enfields are all about affordability my cheap ass is even more intrigued.

There’s just the niggling issue of, well, will this bike actually work.

I’ve never ridden an Enfield myself, but Sam Bendall over at RideApart.com has, and said “the press bike had bits falling off of it after 4000 miles and the electronic fuel injection systems were often spotty.”

Then again the company’s CEO Siddhartha Lal got a lengthy post in theTimes Of India’s website to say how totally awesome the bike was going to be; “Fewer moving parts with modern materials and aggregates means that the engine is low maintenance and very efficient, and can go 10,000 kilometers between oil change.”

Ok so, I guess the only thing to do is reserve judgement until we actually get to ride the thing. Based on the design and concept, I’m on board. If it can get me over the highest road in the world, I’ll be over the moon with this thing.

At least they proved it can survive a couple wheelies! Stay tuned for updates, this is going to be one to watch.