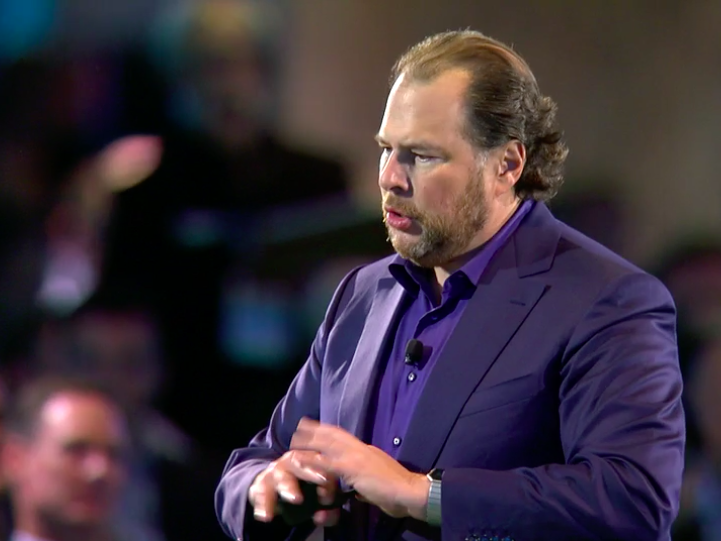 Salesforce reported its third quarter earnings on Thursday after the bell.

It’s a beat across the board and Salesforce’s stock is up by over 6% in after hours trading.

Here are the most important numbers:

The results should be viewed as a big positive as there were some concerns around growth stalling due to weaker currency rates. Salesforce also noted weakness in its US sales last quarter, but that doesn’t seem to be a problem anymore.

This should add momentum to Salesforce’s fourth quarter, typically its biggest quarter of the year. Salesforce gave fourth quarter revenue guidance in the range of $2.26 billion to $2.27 billion, exceeding street estimates of $2.24 billion.

The company also raised its full year revenue guidance to $8.365 billion to $8.375 billion.

Salesforce CEO Marc Benioff said in a statement that the company is on pace to finally hit the $10 billion annual revenue milestone next year, a goal he’s set years ago as a priority.

“I’m delighted to announce that we expect to deliver our first $10 billion year during our fiscal year 2018, which puts us well on the path to reach $20 billion faster than any other enterprise software company,” Benioff said. Sales Cloud continues to be the largest business for Salesforce, accounting for nearly 40% of revenue. But Service Cloud, App Cloud, and Marketing Cloud all kept up robust growth this quarter, with Marketing Cloud seeing the strongest jump in year-over-year revenue.

The company also noted that there’s a backlog of over $12 billion in revenue that’s not recorded yet due to accounting reasons.

Operating income (non-GAAP) continued to grow, reaching $273 million this quarter, up 20% from last year. Salesforce has been putting a lot more emphasis on margin expansion in recent years as the company stepped into the next phase of its growth.

Salesforce had a busy third quarter. Its huge Dreamforce annual conference took place in October, where it revealed its latest new product, Einstein.

It also had to deal with rumors of buying Twitter, a move investors didn’t like and drove the stock down by as much as 8%. Benioff was later forced to tell worried investors that he’s walking away from the deal to quell investor concerns.

NOW WATCH: The ‘Apple of China’ just unveiled a phone that’s more powerful and better looking than the iPhone