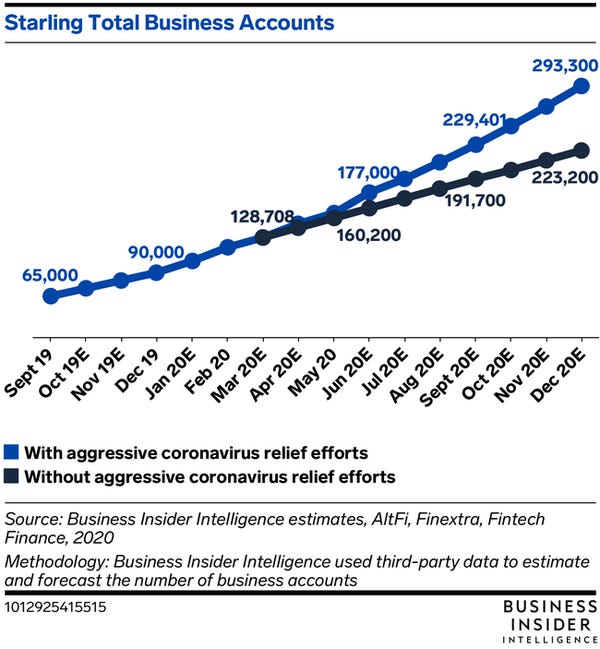 Starling has been squeezed by low interest rates and a flood of deposits that can’t be lent out as quickly as deposits have flowed in, and the bank has had to impose fees and pass along costs to its customers to contain losses: The fees include £5 ($6.38) for debit card replacement, £20 ($25.53) for a large payment with same-day settlement, and £2/month/account ($2.55) for additional current accounts.

The interest rate will be -0.5% on euro-denominated current accounts, charged on deposits greater than €50,000 ($55,985), passing along the cost of the interest the European Central Bank charges on deposits. Starling will introduce the new rate and fees on November 4.

Starling and its competitors’ losses magnify as revenues grow. Starling, Revolut, and Monzo all reported ballooning losses for fiscal year 2019. Starling’s losses were the smallest, but it also reports 1.5 million customer accounts, making it the smallest of the three and making its per-user losses comparatively high:

Starling expects to reach profitability by 2021 at least in part due to growth in its SMB banking business and its product line expansion. Before the pandemic, it already had a lending arm focused on overdraft, personal loans, and unsecured business loans. It was also an accredited lender in the UK’s Coronavirus Interruption Loan Scheme (CB ILS), through which it lent £903 million ($1.15 billion) by the end of July.

Fees are a near-term survival tactic, but Starling’s focus on profitability could make it a long-term contender in banking. Starling’s new fees and the negative interest rate it will charge on large euro deposits are measures to break even on current accounts: They offset the costs of money-losing services, but fee income will be tied linearly to new accounts and will not provide the growth kick that would make Starling profitable.