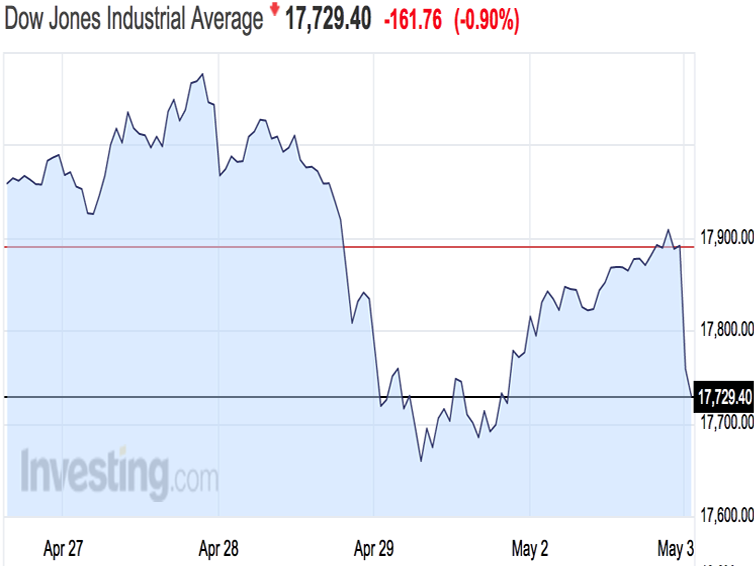 Major global markets and US stocks were weaker on Tuesday after some ugly news out of China.

The energy, financials and materials sectors were the biggest losers.

Energy was off more than 2%. Crude oil prices were lower, too; West Texas Intermediate crude futures in New York dropped 2% to as low as $43.38 per barrel.

On Monday, stocks rose steadily into the close with the Dow finishing up 117 points.

To catch you up on the big markets news so far:

European stocks dropped following the news out of China, with the Stoxx Europe 600 falling by as much as 1.7%. And so, “China concerns” is an explanation we’re starting to see again for the sell-off on Tuesday.

The US economic-data calendar is light. US auto sales numbers for April are rolling in throughout the day, and they’re expected to show a rebound after an unexpected dip in March.

This would reassure economists that consumer confidence and spending on big-ticket items remains robust, following a record year for car sales.

In earnings, Halliburton reported a bigger-than-forecast loss of $2.41 billion, or $2.81 per share. The world’s second-largest oilfield services company was slammed with nearly $3 billion in asset impairment charges, among others. The company delayed its earnings from last week as it tried to finalize the now-squashed acquisition of Baker Hughes.

SEE ALSO:Tuesday’s auto sales report is a crucial test for the US economy