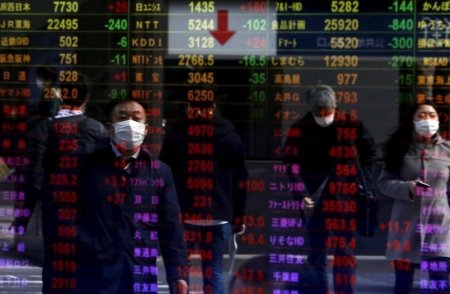 SYDNEY (Reuters) – Asian share markets were scorched on Tuesday as stability concerns put a torch to European bank stocks and sent investors stampeding to only the safest of safe haven assets.

As fear overwhelmed greed, yields on longer-term U.S. Treasury debt hit one-year lows as bond prices rose, the yen surged to a 15-month peak and gold reached its most precious since June.

The jump in the yen piled further pressure on Japan’s Nikkei which sank 3.4 percent. MSCI’s broadest index of Asia-Pacific shares outside Japan fell 0.8 percent, and would have been lower if not for holidays in many centers.

“Sentiment towards risk assets remained extremely bearish and price action reflected a market that may be capitulating,” said Jo Masters, a senior economist at ANZ.

All of which raised the stakes for Federal Reserve Chair Janet Yellen’s testimony on Thursday.

“She needs to come across as optimistic without being too hawkish and cautious without being negative,” said Masters. “Hawkishness or dovishness could easily exacerbate the current sell-off, tightening financial conditions further.”

The rout began in Europe where the FTSEurofirst 300 index shed 3.4 percent to its lowest since late 2013, led by a near 6 percent dive in the banking sector .

Deutsche Bank alone sank 9.5 percent as concerns mounted about its ability to maintain bond payments. Late Monday, the German bank said it has “sufficient” reserves to make due payments this year on AT1 securities.

The cost of insuring bank debt against default also climbed to its highest since late 2013. Borrowing costs in Spain, Portugal and Italy jumped as investors demanded a fatter risk premium over safer German paper, where two-year yields hit record lows at minus 52 basis points.

“The ‘fear factor’ in markets has morphed from being about an emerging market hard-landing and collapsing oil prices to being about the extent of the slowdown in the developed world and the ability of central banks to reflate asset values yet again,” said analysts at Citi in a note.

The Bank of Japan’s recent shift to negative rates has fueled concerns that ever-more exotic monetary policy is rapidly reaching the point of diminishing returns.

Yet murmurings about the risk of recession in the United Sates has also led investors to wager the Federal Reserve will have to slow, or suspend altogether, plans to normalize rates.

Futures markets have priced out any chance of a hike in March and imply a funds rate of just 0.45 percent by December . The current effective funds rate is 0.38 percent.

That has pulled down Treasury yields and undermined bullish bets on the U.S. dollar, which had been a very popular trade. Against a basket of currencies, the dollar fell 0.4 percent to 99.654 . It touched a six-week trough on the Swiss franc , while the euro held firm at $1.1200 .

With more and more sovereign bonds paying negative rates, the relative cost of holding gold has seemed less and less of a burden. The yellow metal reached its strongest since June at $1,200.60 an ounce, to last trade at $1,188.