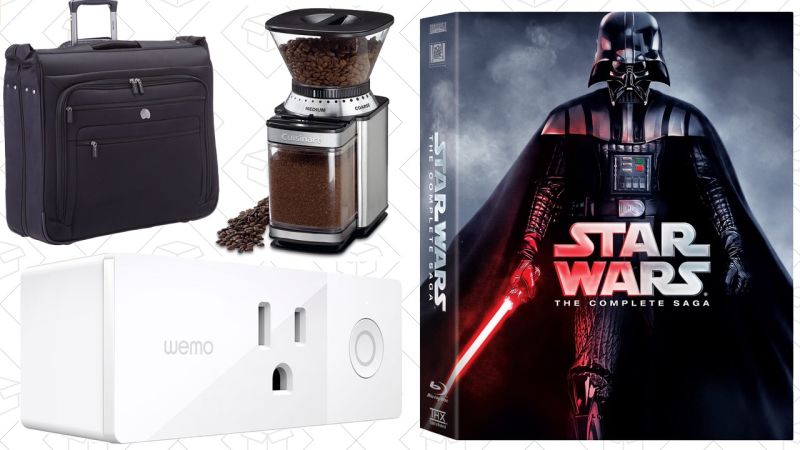 Not only is the new WeMo Mini Smart Plug smaller than the top-selling original so as to only cover one outlet, it’s also cheaper. You’ll almost always see it available for $35, but today on Amazon, it’s knocked down to $30, matching a deal from earlier in the month.

Despite its diminutive size, this includes all the same features as the full-sized WeMo Switch, including IFTTT support, Alexa compatibility, and an Away mode that will randomize your lights to deter ne’er-do-wells.

Amazon makes its own Bluetooth speaker, and with a 12 hour battery and IP67 water resistance, it’s actually a very impressive package for just $18.

If you have more to spend, the UE ROLL 2, which is one of your five favorite water resistant Bluetooth speakers, is also on sale for $55 today.

Five water-resistant speakers made the cut after the nomination round of this week’s Co-Op, but… Read more Read more

Sony’s MDRV6 Studio Monitor Headphones are some of the oldest (25 years old!) still-relevant headphones on the market, and have always been one of the best values in the space. In fact, they were one of our readers’ five favorite headphonesperiod in a Kinja Co-Op earlier this month.

Turns out, people have pretty strong opinions about headphones! Who would have guessed? Read more Read more

If you’re in the market, Amazon’s marked the MDRV6 down to $78 today, which is about as low as they get these days.

Vizio’s 5.1 channel sound bar systems are the simplest way to add surround sound to any home theater setup, and refurbs of the 40″ model are down to $210 on Amazon, the best price we’ve ever seen.

So, you’ve decided to upgrade your home theater audio to surround sound. You could research… Read more Read more

We’ve seen better deals on the 38″ version in the past, but the 40″ model, in addition to being, you know, 2″ longer, also includes HDMI audio input and metal accents.

This product is called The Battery Organizer. It’s very appropriately named, and also $5 off.

Sennheiser’s HD 598 headphones have long been a mid-range staple, and today, the new closed back version is down to $100 on Amazon, matching an all-time low.

The 598 Cs employ the same comfortable design as the standard 598s, but the closed back means that you can enjoy them without disturbing those around you. In short, it’s one of the best ways to ignore your coworkers.

Sure, you could borrow someone’s cable login and stream the Final Four, but then you’ll be like 90 seconds behind Twitter and excited texts from your friends, which is the worst. But with this $15 amplified antenna, you’ll be able to pull in CBS (plus the other broadcast networks) live, for free, and with better picture quality than you get online.

Just be sure to check out Lifehacker’s guide before you buy to find out if an indoor antenna will work well in your area.

If you’re thinking about cutting the cable to save some money, you’ll need a good… Read more Read more

Just in case you want to flee the country any time soon, this international power adapter includes three AC outlets and four USB ports, plus US, UK, EU, and AU plug adapters. This was one of our readers’ five favorite international adapters, and today’s price is the best we’ve ever seen.

Amazon is having a sale on a crazy amount of luggage, backpacks and more for the whole family, including the TravelPro Maxlight4 (the sequel to your favorite carry-on luggage), hardside spinners from Delsey, and a lot more. So, if you’ve been using that duffel bag since college and you have a flight to catch soon, you should get on this one.

You guys seem to have very strong feelings about luggage, but at the end of the day, Travelpro’s… Read more Read more

It’s a scientific fact that breakfast in bed is the best form of breakfast, and it’ll be better than ever with this discounted bamboo tray.

It’s easy to see why Cuisinart’s DBM-8 electric burr coffee grinder is Amazon’s top seller in the category. It’s affordable, it’s dead simple to use, it includes 18 coarseness settings, and it looks great. Today’s $40 price tag is roughly $5-$10 less than usual, so perk up, and lock in your order before it sells out.

Celebrate the end of winter with up to 30% off hundreds of pieces of patio furniture from Target, plus an extra 10% at checkout with promo code REFUND, and an extra 5% with REDCard. I ordered a bistro set.

If you’re still using ugly CFLs or inefficient incandescents in any of your lighting fixtures, Amazon will sell you 16 Philips LED 60W equivalent bulbs for $25 right now, an all-time low, and one of the best LED bulbs prices we’ve ever seen.

Miniature LED flashlights are so cheap and ubiquitous now, there’s no excuse not to have one tucked away in every glove box and every room of your house. Get four zoomable lights from OxyLED for just $14 today, matching a deal from earlier in the month.

Usually, when there’s a deal on Rubbermaid’s top-selling FreshWorks containers, it’s on the 2-pack. But today, you can augment your collection with an individual large container for $10, the lowest price in months.

We’re all probably a bit ashamed of the amount of produce we allow to spoil in the fridge, but… Read more Read more

If you aren’t familiar with these things, each FreshWorks product includes a “crisp tray” which elevates your produce off the bottom of the container, giving moisture a place to drip, and air enough room to flow. The lids also include special filters that regulate the flow of oxygen and CO2 into and out of the containers, allowing your fruits and vegetables to stay fresher, longer.

If your wiper blades have seen better days, Amazon will sell you two Michelin Stealth replacements today for $20. Just add any two to your cart (shipped and sold by Amazon.com), and the price will automatically be reduced to $20 at checkout. The deal even works if you buy two different sized blades, so you should have no trouble finding a combination that fits your car.

The RoboVac 11 from Eufy (a division of Anker) is one of your favorite robotic vacuums, and in my own testing, it’s every bit as good (and far quieter) than my Roomba 770. If it’s been on your radar, today’s deal on Amazon is one of the best we’ve ever seen.

I’ve been a happy Roomba 770 owner for over a year now, and will continue to be until it dies, but… Read more Read more

We received a ton of nominations this week for the best robotic vacuum, but now it’s time for one… Read more Read more

Despite its impressive performance, the RoboVac normally sells for over $100 less than the Roomba 650, and today on Amazon, you can get and extra $33 off its usual price. Vacuuming is the worst chore, so it’s worth every penny to pawn it off to a robot.

Burt’s Bees is our readers’ favorite lip balm (and mine as well, for whatever it’s worth), and $6 is about as cheap as you’ll ever see a 4-pack.

After a record number of comments, nominations, recommendations, and votes, Burt’s Bees is your… Read more Read more

Amazon sample boxes are one of the only good things to come out of 2016, and they’re back at it again with a $10 box full of men’s grooming gear, plus a $10 credit to spend on over 130 select men’s grooming products on your next order. Assuming you use the credit, that basically means you got six name-brand products for free.

When it comes to having a corner on the market, nothing really compares to Nike. And right now, they’re having giving you 25% off clearance items with the code 25MORE for both men’s and women’s styles. Check out a bunch of items, from sneakers to running gear, to sweatpants, and hop on that sportswear bandwagon.

Amazon’s back at it again with another sample box deal. This time around, $8 gets you 10 protein products from BSN and Optimum Nutrition, plus an $8 credit on your next protein purchase from Amazon. If you were going to buy any of these products anyway, then this is a no-brainer.

The Star Wars “Complete Saga” Blu-ray isn’t actually complete anymore, since it doesn’t include The Force Awakens or Rogue One, but $58 is still the best price we’ve seen on the first six films. You also get audio commentary on each movie, 45 deleted scenes, and three bonus discs full of extra featurettes.

This weekend’s Kindle ebook sale doesn’t have an overarching theme, but you can still choose from over 20 popular titles for $4 or less.

This weekend only, Amazon Prime members can purchase dozens of popular films digitally for just $5 each. These aren’t rentals; they’re yours to keep, so you can rewatch The Accountant as many times as you want.

Ticket to Ride is a great board game, but in my opinion, the mobile app version is actually more fun to play than the real thing.

Much like Chewbaca, the new Star Wars: Rebellion board game is intimidating and difficult to understand at first, but the more time you spend with it, the more you’ll love it. Amazon’s marked it down to $63 today, and yeah, that’s a lot for a board game, but it’s about $10-$12 cheaper than usual, and each play-through will keep you entertained for an entire evening. Just be sure to let the wookiee win, and lock in your order before Amazon alters the deal.

Most Star Wars games put you in command of a few brave heroes of the galactic struggle. Star Wars:… Read more Read more