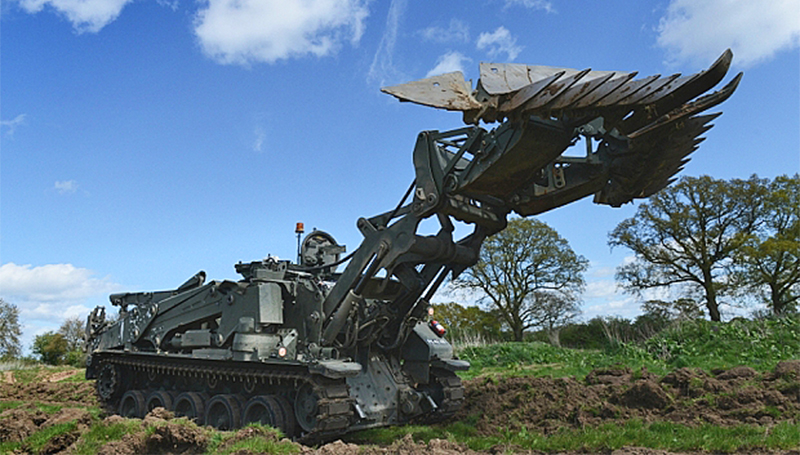 British Army and Royal Marine engineers had relied on FV180 Combat Engineering Tractor for four decades prior to 2013, but that began to change just a few years ago. BAe Systems’ ridiculously versatile, and rapidly transportable combat engineering vehicle named the Terrier has taken over the role, and it’s not just a combat-engineering vehicle—it’s also a transformer.

The 32-ton Terrier can dig ditches, drill holes, excavate defensive positions, clear obstacles such as boulders, structures, bridges, cars and logs, and haul all types of building materials. It has a long menu of attachments to make all this happen, including trailers, pincers, rock hammers, hoists, shovels, augers and buckets. It even has a ripper tool that makes roadways and runways unusable by the enemy. A medium machine gun can also be installed for self defense.

For mine clearing, which is possibly Terrier’s most important job, it can use its wicked looking extended-length plow that can destroy mines and buried improvised explosive devices while traveling at around tens miles per hour. Alternatively, Terrier also packs the UK’s version of a rocket-assisted mine clearing line-charge called Python.

Usually tanks are supposed to avoid mines and buried bombs, but somebody, and something, has to… Read more Read more

Just recently, Terrier received an upgrade via yet another attachment, a telescoping arm that can reach out 26 feet to investigate potentially deadly improvised explosive devices both buried and on the surface. Such a capability is obviously hugely valuable as roadside improvised explosive devices can not only kill, but dealing with them using robots and other tedious tactics can slow a convoy or an operation to a halt—putting everyone and everything in elevated danger.

Terrier is well armored and resistant to mines and RPG. It can work openly in areas that are under indirect fire from mortars and artillery. It is powered by a Caterpillar C18 turbocharged diesel engine that cranks out 700 horsepower, allowing it keep up with Challenger main battle tanks on and off-road.

Terrier can also wade through deep water, including handling wave surges up to six and a half feet. It’s 32-ton weight and modular format allows it and its attachments to be rapidly transported via A400M or C-17A aerial transport even to austere airstrips.

It has an internal crew of two but it can also be operated remotely via an Xbox-style controller and hardened laptop when undergoing especially dangerous tasks. On the inside, Terrier is as smart as they come, featuring “drive by wire” joystick control system as well as 360-degree camera system that has full night vision and thermal-imaging capability. The vehicle’s environmental system allows its occupants to work in nuclear, chemical and biological warfare environments.

Not only is pretty much everything about the Terrier high-tech, but so is the way soldiers are trained to operate it. BAe Systems built an elaborate full motion simulator that allows crews to learn how to operate Terrier, even executing complex tasks in tough environments, before ever touching the actual vehicle.

In all, the UK Ministry of Defense has ordered 60 Terriers under a $522 million contract and the idea is to eventually export the versatile design to friendly countries. The issue is that the vehicle’s extreme capabilities come at a high price, with each unit costing around $8 million. Yet the Terrier is a force multiplier of sorts for both large mechanized units and smaller light infantry units alike, as it provides ease of access access, enhanced fortification and generally improved forward operability. It can also deny the enemy access and the ability to survive under certain scenarios.

The armored bridgelayer, also known as the armored vehicle-launched bridge, is a key component of… Read more Read more

Even a substantial army does not need a huge fleet of these vehicles, so if a country has already blown billions on advanced tanks and armored fighting vehicles, spending a couple hundred million more to provide a ton of enabling capability that Terrier provides makes some sense.

Still, with land systems taking a back seat to air and naval systems these days, it may be hard for BAe to find buyers that will prioritize buying something so costly that doesn’t collect intelligence or shoot anything. There has been some interest from France and a few other countries, but no orders have been placed.

It is a bit surprising that the U.S., which can afford to equip its forces for a large scale of wartime scenarios, has not shown any interest. For austere forward deployed missions, a do-all engineering vehicle like this that provides a minimal logistical footprint seems like an attractive capability. Even Special Forces Command could probably make a case why the Terrier could have a place within the U.S. ground combat vehicle inventory.

Regardless of if Terrier will find export success or not, it is very cool that BAe built what is undoubtedly most kid’s ultimate imaginary Tonka Truck. In fact, I bet this crazy thing was designed in crayon many times over long before the engineers at BAe Systems ever began drawing it out.