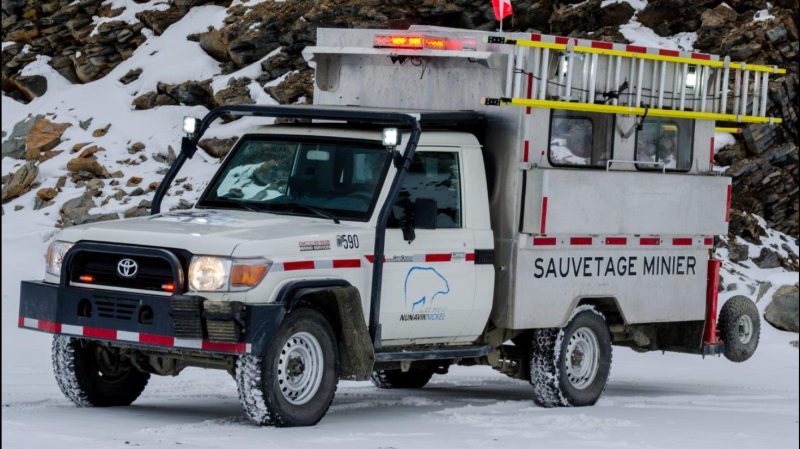 Though it’s far from confirmed, rumors abound that the current Toyota Land Cruiser could be the last one destined for the U.S. market. The robustly-built $90,000 SUV sells slowly to a small but dedicated fanbase, but they may have to settle for its Lexus-badged LX instead, just like our friends in Canada have for a few years now.

Now, your average Canadian might be forced to buy a Lexus instead, but there is another Land Cruiser available in Canada, but most people can’t buy it and those who can buy it have to keep it off public roads. That Land Cruiser is the 70 Series, which is no longer approved for on-road use, though miners get some special dispensation to get to use their favorite truck.

Up in Canada’s immense interior, the name of the game is mining. Whether it’s oil sands, potash, heavy metals or gold, according to the Canadian Ministry of Natural Resources, mining represents CA$97 Billion or 5% of Canada’s annual gross domestic product. All of that mining employs more than 600,000 Canadians and all of those miners need tough trucks to get them where they need to go, both above and under the ground.

To get from place to place, Canadian miners have taken a page from their fellow Commonwealth members in the Southern Hemisphere. Australian miners have long had a love for the 70 Series, the tougher older brother to the plush 200 series on sale in the United States today. The mining industry loves them so much that apparently its demand for Land Cruisers is what has kept them available in Australia.

The 70 Series, which began production in the mid-80s, has come to be the vehicle of choice for miners Australian and Canadian alike, but not quite in standard spec. The Land Cruisers that have found home in Canadian mines are not the standard models an Australian carpenter might use to get from job to job. The trucks are modified by a number of companies and sold through special mining equipment distributors rather than through the normal Toyota dealer network.

ENS Industrial in Saskatchewan, Miller Technology out of Ontario and Netherlands-based Tembo4x4 (through Canadian distributor ACCES) seem to be the two main suppliers of mine-spec Land Cruisers in Canada. Their offerings are largely similar, heavily customizing the base machine to turn them into off-road monsters with protective cages custom bodies for hauling gear and workers through the difficult terrain mines tend to be made up of.

The modifications these trucks receive are more than just bespoke bodywork. one of the more interesting features I’ve seen available are Ausco wet brakes. These brakes encase the multiple discs for each wheel in an aluminum housing containing a liquid coolant to keep brakes from fading as quickly and to protect brake components from debris.

These Land Cruisers are not just for use above ground, though. The diesel engine in the 70 Series is approved for use in underground mines and both Miller and Tembo4x4 build cut-down versions of their machines with the roof and windshield removed for use in confined spaces.

If diesel emissions underground aren’t your thing, that’s alright too. Both companies are also offering electric-drive versions of their Land Cruisers for subterranean use. The Miller Technology Electric Land Cruiser is essentially a bolt-in kit that goes under the hood, putting both the batteries (a 46 kWh pack sourced from Samsung) and the motor (90 kW) where the diesel powertrain would normally go.

Tembo4x4’s kit, which is also available for the Hilux pickup, uses a similar set up, sticking either a 110 or 65 kW motor and up to a 56.8 kWh battery pack under the hood. Tembo4x4 says their truck is good for either 80 or 160 km of range depending on the spec equipped, and while Miller’s website does not discuss range, we can assume that its smaller battery pack means its range will be a bit smaller.

Tembo4x4 has recognized that game wardens and safari drivers, another group who have a special affinity for the 70 Series, might also benefit from an electric drivetrain. To tap that market, the firm has begun to build a version of its EV for game viewing as well. In their marketing materials, Tembo4x4 detail how their EV Land Cruiser can get people closer to wildlife while reducing emissions.

Though there is no trace of the Canadian Land Cruiser left on Toyota’s website, and mines are not typically open to the curious public, there are still two places where you can see one of these trucks.

A few years back in 2013, the Canada Science and Technology Museum in Ottawa acquired a yellow Miller Technologies mine truck from a potash mine in Esterhazy, Saskatchewan for display. The truck appears to be based of the narrower Land Cruiser Prado rather than the full-size 70 Series trucks currently for sale, but I’m not sure I could identify it definitively off-hand. Maybe some of you can help?

If you don’t want to goto Canada, another newer truck built by Miller is on display at the Land Cruiser Heritage Museum in Utah. Acquired this year, the truck they have appears to be an outdoor model rather than the subterranean vehicle on display in Ottawa, with a heavy piece of steel guarding the roof of the closed cab from any falling debris.