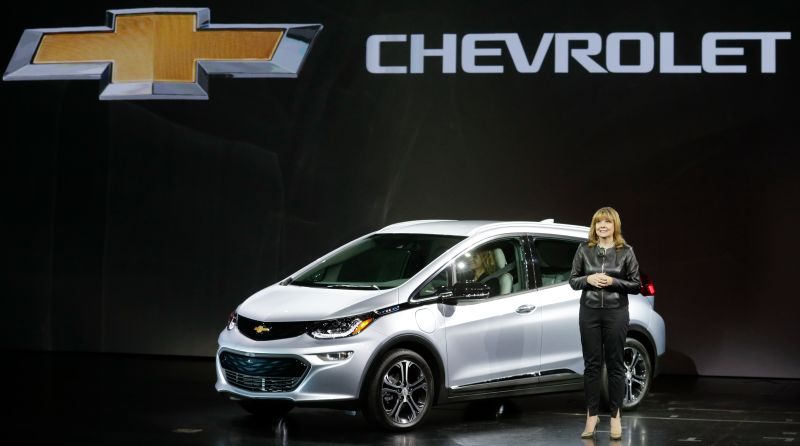 Despite Mary Barra’s best attempts at a dig towards Tesla Motors during today’s presentation of the all-electric Chevy Bolt at CES, development of electric vehicles from traditional automakers is exactly the kind of stir up Tesla intended to cause.

CES has been all about the future of cars this year, so it makes a fitting home for General Motors’ … Read more Read more

The Bolt hatchback that Chevy revealed today is the first affordable, practical electric vehicle with a range that’s more attractive to the traditional car buyer, coming in at around $30,000 (after incentives) with a fully electric range of around 200 miles. GM CEO Mary Barra tried a little too hard to compare the Bolt’s accomplishments, including a dealer network in America of over 3,000 locations, to Tesla Motor’s issues with selling and servicing its expensive electric models in all 50 states.

The thing is, Tesla isn’t too fussed about it, being an electric-exclusive automaker that has seen a great amount of success, and gone on the record time and time again to encourage other start-ups and automakers, specifically larger traditional automakers like Ford and Chevy, to put forward a serious effort at electric vehicles, resulting in something like the new Chevy Bolt.

Commitments from traditional car makers to build electric vehicles advance Tesla’s mission to accelerate the advent of sustainable transportation. We hope to see all those additional zero-emission vehicles on the road.

It also has something to do with the benefits of healthy competition and the fact that Tesla is investing big into a $4 billion gigafactory to supply batteries to future electric vehicles across the world. More companies developing EVs means, in one way or anther, more potential customers to Tesla.

The other main indirect benefit for Tesla with other automakers jumping into the electric vehicle market is raising consumer exposure to the thought of owning a fully electric vehicle and ditching the century old habit of filling up at gas stations. The more EVs on the market means a greater consumer acceptance, just as Tesla brings to market its affordable long-range electric vehicle in the upcoming Model 3, set to debut in concept form sometime this year.

It’s not all about Tesla though, as the Chevy Bolt looks to be a serious attempt by the company to grow the electric vehicle market, and with a price of around $30k and a range of around 200 miles — and maybe more importantly a design that will be acceptable to the mainstream automotive customers — Chevy’s EV has a serious shot at being a hit.

And plus, with electric vehicle competition growing, prices of EVs dropping, and ranges extending makes for great opportunities for consumers. Let’s just hope the Model 3 keeps the sex-factor of the Model S, as the lower end of the EV market is currently void of it.

Editor’s note: Tesla had a slight grammatical issue in its initial statement. We’ve updated the post to reflect the corrected statement.