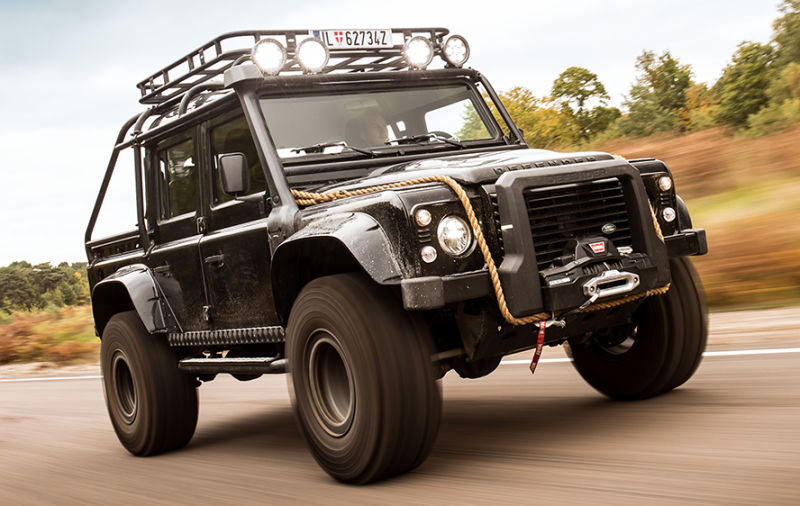 Beloved British car writer and collector Harry Metcalfe has added one hell of a vehicle to his garage: one of the ten Land Rover Defender SVX monster trucks made for that mountain chase scene in the last James Bond movie Spectre. Lucky for us, Metcalfe’s taking the opportunity to crawl all over it with a camera.

Metcalfe summarizes the truck as a “mega bit of kit” because he just has to be as British as humanly possible.

I’m guessing Spectre was still filming when he shot this little walkaround because he says he “can’t say” what the vehicle was doing in the Swiss Alps, but obviously those enormous tires and pirate rigging make the machine pretty unmistakable from the ones running Daniel Craig’s 007 down a mountain in the movie.

To answer your first question, those tires are 37-inches tall and just over a foot wide. “Really good in snow and mud. It’s completely useless on tarmac as I’ve discovered,” Metcalfe elaborates.

He says the 2.2-liter diesel engine is putting out about 185 horsepower and 367 ft-lbs of torque. No mention of fuel economy though.

The on-board fire suppression system is a fun touch, though I think the hydraulic handbrake would be my favorite feature as soon as somebody got it working.

Metcalfe declines to mention what he paid for the Land Rover, though he does say it’s not street legal. Good thing he has a massive farm to play around on.

Check out his video for a closer look at the car. And in case you’re confused about the “Rose jointed suspension” he mentions, we typically call that a “Heim joint” in America. The generic term would be “spherical rod ends.” In this case, it replaces a bushing with a movable, metal joint that I guess might theoretically be stronger. I know these are commonly used in extreme off-road steering applications, especially desert driving, but I can’t say I’ve seen them used to mount a shock before.

Metcalfe says this truck’s suspension was set up by Bowler, the same company that turns Land Rovers into race cars. I’d love to find out more about their design at some point.

At any rate, the Defender SVX looks boss and I’m glad to see at least one is still being used and enjoyed after its life as a movie star is over.

SPECTRE: The Classic Bond Movie I Was Definitely Not Expecting