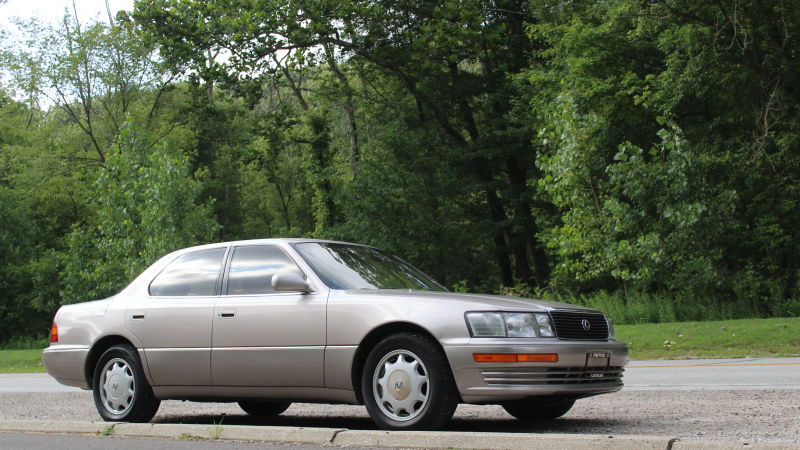 We idolize it, but ultimately, the first-generation Lexus LS 400 is pretty much just a sedan that debuted in 1989. I knew I wanted one, but as I set out to test drive a clean and well-priced example, I figured I had to lower my expectations. Like we’ve said, your heroes tend to disappoint you.

So when I started backing this particular 1993 LS 400 down the owner’s driveway, I was expecting the sort of sloppiness of an old luxury barge. But the LS 400 doesn’t waft or wallow, it glides. Even by modern car standards, this thing is capital-S Smooth.

That continues on the road, where slick shifts make you forget that you’re dealing with a 26-year-old four-speed transmission. You’ve also got a 4.0-liter V8 providing 250 horsepower and it insists that really, honestly, it’s no trouble at all. It never feels taxed. Under hard acceleration, the LS 400 is significantly quieter than the four-banger in my mom’s 2017 Acura.

Of course, the LS 400 is still—by the legal definition of the state of Ohio—a classic car. It doesn’t have the latest and greatest technology, but that’s to be expected. When shopping for used cars, I care about two modern features. The first is that I’m an absolute sucker for automatic climate control. The second is that I need to have a way to play music through my phone.

The LS 400 checks my first box. It’s got climate control, with super-strong air conditioning that shames a lot of British and German systems on sale today. Sure, a modern American or Japanese car can freeze the whiskers off a seal, but the LS 400 can still make you shiver on a 90-degree day. Because it’s automatic climate control, I can set it to 74 degrees and not worry about fiddling with it.

And thanks to my trusty tape-deck-to-AUX converter, I can stream music from my phone. Not only that, but this LS 400 was optioned with the Nakamichi audio system.

A $4,573 option in its day—$8,106 in 2019 money—the Nakamichi system was good enough that then-director of the Detroit Symphony Orchestra Neeme Järvi told Car and Driver during a comparison test that, “[t]he Japanese are already in the next century. In this car, I’m in a concert hall. I feel satisfaction from this.”

Right he was. Here we are in the next century and the Nakamichi system undoubtedly sounds more impressive than the Alpine premium stereo in the $90,040 Dodge Challenger SRT Hellcat Redeye I’m testing this week. Its bass response isn’t as good as a modern system, but in terms of fidelity and clarity, it’s seriously impressive. The limiting factor is the tape-to-AUX converter, as this LS 400 doesn’t have a CD player.

The premium audio package for the LS 400 also came with a moonroof and heated seats, both of which make the cabin a more welcoming place to spend time. While you’re packing on the miles, you can enjoy big plush seats, an insanely quiet cabin and relaxed road manners. The LS 400 I drove exhibited no rattling, no shudders, no significant vibrations and no other behavior you might expect from a 26-year-old car with 145,268 miles on it.

That being said, it wasn’t perfect. First, the LS 400 is not fast by any conventional metric. Although, if you’re trying to drive fast, maybe you don’t get the point.

This one also exhibited the typical sticky gauges of the first-generation models. On hot days, the tachometer and speedometer get real cozy resting at 0. Even when you speed up and rev the engine hard, they’re pegged at zilch. In a true example of perfect classic car problem solving, the trick is to whack the top of the gauge cluster and watch them spring to life.

It also was showing a warning light in the gauge cluster, as half of the left brake light was out. There was a minor ding on the edge of one door and some scratching on the bumper.

Besides that, it was a clean and well-kept two-owner car. It was dealer serviced for 21 years and owned by enthusiasts who do their own work since then. Every single power-operated feature from the mechanized headrests to the power-adjustable seatbelt height worked flawlessly.

So I bought it. After four years of fantasizing and a frantic rush to sell off my Miata and Acura CL Type-S, that LS 400 is now my LS 400.