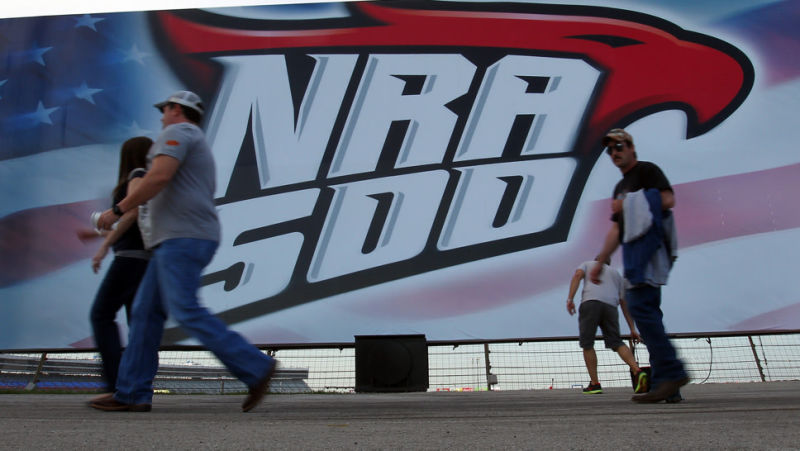 Last week, and in a tweet last night as well, the National Rifle Association rebuked NASCAR after the racing series denied advertisements for K-Var Corp., a large distributor of firearms, ammunition and firearm accessories, as part of a claimed “gradual shift” of position on firearms. The sponsorship denial, issued August 19th, came just days after Cup cars battled it out at Bristol in the Bass Pro Shops NRA Annual Night Race.

The NRA, the largest gun lobby in the U.S., has even gone so far as to call NASCAR “anti-gun,” associating it with other organizations and corporations like Dick’s Sporting Goods and Levi Strauss & Co., which have taken positions the lobby regards as supportive of gun control.


Though the NRA did make sure to condemn the decision and compared it to other efforts to change attitudes towards guns by private corporations and organizations, much of the statement is actually dedicated to an attempt to dismantle the “assault weapon” and “sniper rifle” terminology that many opponents of gun control regard as an unfair characterization of weapons designed for battlefield use yet marketed towards civilians.

The NRA also mentions that a number of the guns that were included in the rejected ads, including the AR-15 and bolt action rifles, were once present in NASCAR materials.

The NRA’s statement comes after K-Var released its own official statement official statement on the advertising denial. K-Var cites a statement from National Event Publications, the media agent for NASCAR as well as many other professional sports organizations which describes NASCAR’s change in policy towards gun ads as part of a “gradual shift”:

We just heard from NASCAR on a number of gun related ads and unfortunately, due a gradual shift in NASCAR’s position on guns, these ads must be edited/changed—especially those that are depicted as assault-style rifles/sniper rifles. NASCAR is still open to some of the less controversial gun accessories, concealed carry, or classes.

If both K-Var’s quotation is accurate and the National Event Publications statement is an honest appraisal of the NASCAR’s position on firearms advertisement, it appears that the series is attempting to find a kind of middle ground as gun control continues to be an important political issue—especially considering the record number of mass shootings this year.

The notion that the organization might be more amenable to some firearms ads and not others suggests that some opponents of gun control may be willing to compromise to an extent and allow for minor concessions, much like how Texas Lieutenant Governor Dan Patrick (R) suggested that he might break ranks with the rest of his party to push for expanded background checks.

The notion of a “gradual shift” also suggests that deeply Southern NASCAR is not done changing its relationship with firearms. (Also, NRA board member Richard Childress, owner of a racing team, stepped down from his role in the gun lobby last month.)

While we don’t have any other additional insight into what that may mean, a number of conservative media outlets, including the Free Beacon, the Blaze, and the Daily Wire had already condemned the decision by NASCAR to deny the placement of the ads and focused precisely on this notion before the NRA released a message of their own on the subject.

The statement also arrives as the NRA continues to sustain not only attacks from gun control groups but also a long period of internal instability, described by our friends at Splinter as the Great NRA Meltdown of 2019. In the face of both external criticism and an internal war over its extravagant spending, the lobby has taken an increasingly adversarial approach.

In this case, the NRA, (which, as a reminder, continues to sponsor an annual NASCAR event, which it has sponsored since 2013) cites the Wikipedia page for Venn Diagrams to describe how closely its membership aligns with stock car fandom proceeds to encourage its members to make a“gradual shift” of their own in regard to NASCAR, and also pokes the organization for declining viewership.

I suppose the question is this: how far will NASCAR’s “shift” go? More and more companies are turning their backs on the NRA lately. But it’s hard to say if NASCAR will go all the way on that as well.