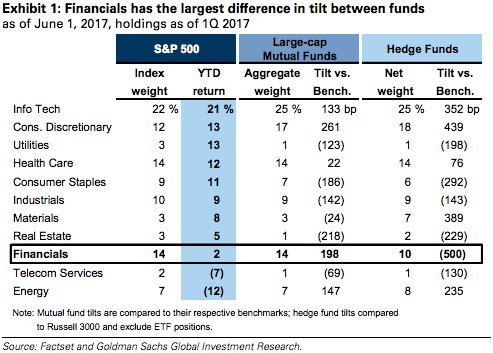 There’s a tug-of-war brewing under the surface of one of the most popular Trump trades.

Financial stocks soared more than any other group in the months following the presidential election on expectations that the president would loosen bank regulations. Now the market’s most sophisticated participants are divided as to whether the strength can continue.

On one hand, hedge funds have largely thrown in the towel. They hold financials the most underweight out of any sector, relative to the Russell 3000. On the other hand, large-cap mutual fund portfolios have financial firms as their second-most overweight industry, compared to the benchmark.

The resulting allocation discrepancy for financial stocks is one of the widest out of any industry group, according to data compiled by Goldman Sachs.

As they wait to see who is correct, hedge funds and their mutual fund counterparts are doubling down, at least judging by allocation changes made during the first quarter. Both groups boosted their relative over/underweightings, exhibiting increased conviction, Goldman data show. Still, not every area of the stock market is so contentious among the different “smart money” groups. Both hedge funds and mutual funds agree that tech stocks are where it’s at. Large-cap mutual funds have about one-quarter of their allocation devoted to the group, while growth funds have 37% earmarked for tech, according to Goldman data.

Generally speaking, a great deal of current trading sentiment is rooted in earnings growth, and future profit forecasts mirror the level of investor conviction. Tech companies in the S&P 500 are projected to see earnings expand by 18.9% in 2017, the most out of any industry in the benchmark, ex-energy.

Forecasts for financials, while strong, are a bit more tempered. The group is expected to grow profits by 12.1% this year, right in line with the S&P 500, data compiled by Bloomberg show.

SEE ALSO:The champions of the Trump trade are on life support