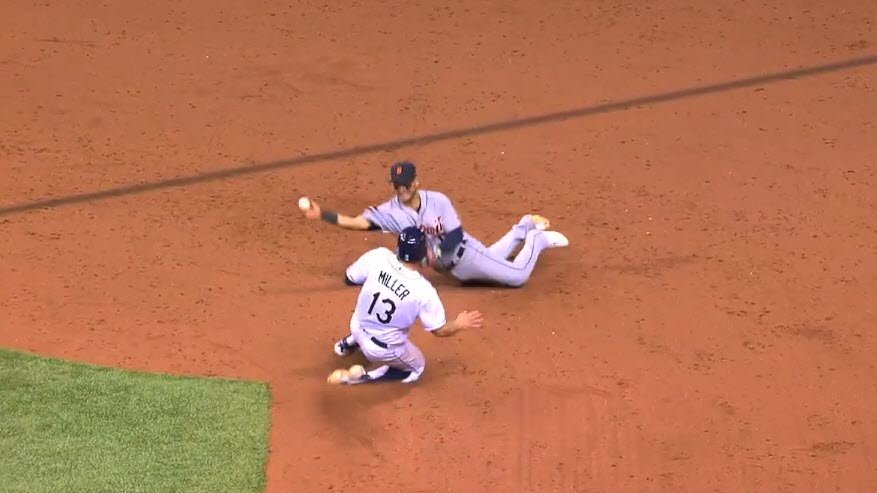 For a brief moment, it looked like the Detroit Tigers were going to escape an inescapable jam and beat the Tampa Bay Rays until the second-base bag got in the way. To make matters worse for the Tigers, it was a play that probably doesn’t happen two years ago.

With the Rays trailing by one in the ninth, they loaded the bases against Tigers closer Francisco Rodriguez and it seemed like, at the worst, the Rays would tie the game and sent it to extra innings. But then Rodriguez struck out Steven Souza Jr. and appeared to get Logan Morrison to hit into a game-ending double-play.

Jose Iglesias tripped over the second-base bag on the throw from Ian Kinsler, and then forced a wild throw to first base. Two Rays runners scored and it was game over.

This play especially notable because it probably would not have happened two years ago, before Major League Baseball outlawed the “neighborhood play.” With the neighborhood play, a middle infielder only needed to be reasonably close to the second-base bag when turning a double-play, something umpires allowed out of safety concerns.

In this case, a throw that was slightly off line from Kinsler, combined with Iglesias trying to make sure his foot was still touching the bag, led to him tripping over the bag when he was originally hoping to slide off the bag to his left.

To add insult to injury, or in this case, injury to insult, Iglesias’ head collided with Brad Miller’s knee. At first it seemed like Iglesias was just staying on the ground out of frustration. So it was several moments before anybody realized he was actually injured. He did eventually get up and walk off the field under his own power.

Here is another view of the play: