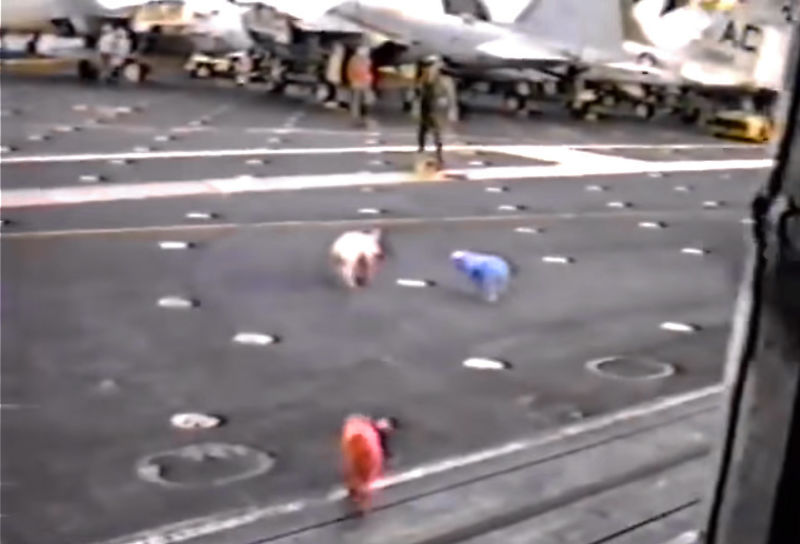 Times have really changed in the Navy. It is a far more “corporate force” than it was in its past. The Tailhook scandal and other embarrassing events have diluted the Navy’s frat-boy culture brilliantly showcased in this little time capsule from 1986, which depicts a piggish prank between supercarriers.

I have heard about this a couple times before, but never saw video of it until now. The story goes that a helicopter crew from the USS America was sent on a mission to deliver “urgent paperwork” to their relieving carrier, the USS John F. Kennedy.

The chopper touched down on the “Big John’s” flight-deck, and out charged three frightened pigs painted red, white and blue, and covered with grease. You can get an idea of the flight-deck crew’s stunned reaction, and the chase that followed in the video below:

Upon their departure, the helicopter crew asked the Kennedy for a “low pass up your port side,” the answer to which was a very clear “negative!”

It is nearly unthinkable pulling off such a stunt today. Not only would the Navy conduct a months-long investigation, after which heads would probably roll, but PETA would also not be to happy. All this adds up to attention that the Navy will clearly tell you they don’t need.

But times were different back then. It was the year that Top Gun was released, for Pete Mitchell’s sake! About the closest thing we have to this event today has to do with a little goat’s voyage from Hawaii to the mainland, and although it has to do with livestock on Navy vessels, it is nothing compared to the pig gag.