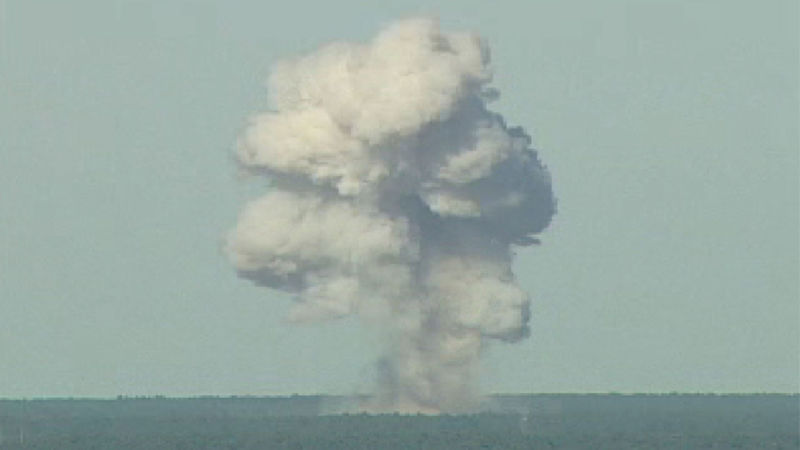 The Massive Ordnance Air Blast bomb, AKA the MOAB, AKA the “Mother Of All Bombs,” is a 22,600 pound American bomb. It is so huge it can’t be dropped out of a normal bomber or fighter jet, it needs to be tossed out the back of a cargo plane. And the U.S. just dropped it on ISIS in Afghanistan, according to a report from CNN.

If you’re wondering why the hell we’re talking about ISIS in Afghanistan, rather than ISIS in Iraq, or Syria, or Libya, it’s because Afghanistan is actually in a much worse state than you remember. The Afghan government and its allies (including the U.S. and NATO) is in the midst of duking it out in a three-way fight with both the Taliban and ISIS.

And if you’re wondering about al-Qaeda (remember them?), ISIS and al-Qaeda don’t exactly get along, either.)

Back to the bomb. From CNN:

The bomb was dropped by an MC-130 aircraft, operated by Air Force Special Operations Command, according to the military sources.

They said the target was an ISIS tunnel and cave complex as well as personnel in the Achin district of the Nangarhar province.

The military is currently assessing the damage. Gen. John Nicholson, commander of US forces in Afghanistan, signed off on the use of the bomb, according to the sources. Authority had to be sought from Gen. Joseph Votel, commander of US Central Command.﻿

The MOAB, which is 30 feet long and more than three feet in diameter, was originally designed back to replace the BLU-82 “Daisy Cutter,” a Vietnam War-era bomb which was so enormous that it was used to instantly clear out jungle helicopter landing fields. It was partially used as a psychological weapon in the first Gulf War and the war in Afghanistan before the last one was used in 2008. In the Gulf War it was swiftly followed by American psyops leaflets, which read:

You have suffered horrendous losses as a result of us using the most powerful conventional bomb in this war. It has more explosive power than 20 Scud missiles. Beware! You will soon be bombed again. Kuwait will be free of aggression. Join your brothers in the south. We will treat you with love and respect. Leave this position. It will not protect you.”

The MOAB is more powerful than the Daisy Cutter. For a bit of reference, the MOAB explodes with almost three times the force used to destroy the Alfred P. Murrah federal building in the Oklahoma City bombing.

In case you were concerned that this was merely the largest bomb in all of existence, rest assured it is not. In 2007, Russia developed a weapon that was quickly dubbed the “Father of All Bombs,” which is claimed to be four times as powerful as the MOAB itself.

This Is How You Make A Hydrogen Bomb

Donald Trump Has No Clue About Nukes