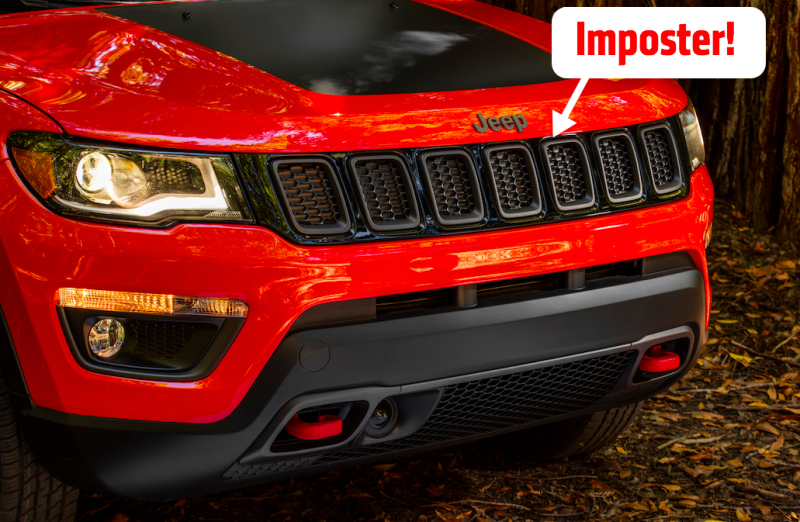 Let me apologize up front, because I’m about to show you something that cannot be unseen. Every time you look at a 2017 Jeep Compass on the road, you won’t be able to keep your eyes off that big, fat imposter of an upper grille.

I should really say grilles—plural—because those are seven pieces of solid plastic clipped into the Jeep Cherokee’s front fascia. And they appear to be there purely for decoration on U.S.-spec models, blocking any and all airflow from entering the cooling module. Have a look for yourself:

Of course, there’s good reason for these fake grille inserts, as blocking excess airflow from entering the cooling module reduces drag associated with air bouncing around a very un-aerodynamic engine bay. With the grille blocked off, the air can flow over and around the Jeep’s slippery aerodynamic profile.

Some automakers, including Fiat Chrysler, keep the real grille and use active grille shutters to keep air flowing around (instead of inside) the Jeep when the engine doesn’t need the cooling. But in the case of the U.S.-spec Compass, Fiat Chrysler engineers must have determined that, in testing for U.S. use cases and with heat rejection from U.S.-market powertrains, the two lower grille openings provide enough airflow to keep the engine, transmission, and AC system happy.

A look at the Renegade built for other markets shows that the inboard five grille inserts have holes in them to allow extra airflow, presumably because of different powertrain options and perhaps more strenuous use conditions in markets outside the U.S.:

This completely blocked-off upper grille isn’t such a surprise, though. First, it’s similar to the upper grille on the Renegade, which is also mostly blocked off. Second, the prototype Compasses running around also had no openings above the front bumper. It’s unlikely engineers would want to test a vehicle with less airflow than the production model.

Of course, the Compass isn’t the only vehicle with a fake grille; the refreshed Saturn Vue’s grille was a giant piece of plastic and the Tesla Model S’s grille was mostly decoration. Even the East German Trabant had a grille just for looks.

But as much as I’m a fan of automakers embracing the grille-less look instead of putting on airs, something tells me Jeep isn’t going to go that route. Gotta keep that “signature seven slot grille!”