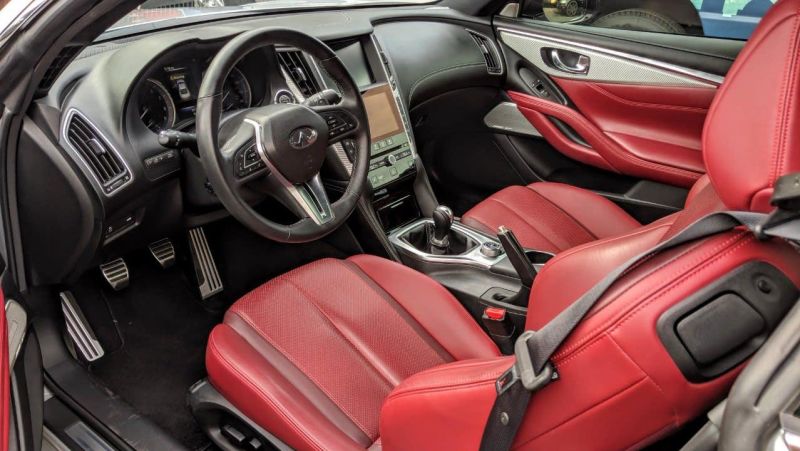 Like many sporty cars these days, the Infiniti Q60 Red Sport 400 is only available with a transmission that is shifted by computer rather than three pedals and a hand rod thingy. The 3-liter twin-turbo Nissan VR30DDTT is a gem of an engine, and the Q60 chassis is pretty great, too. While the steering is a bit numb and weighty, and the automatic is a bit uninspiring, It’s still a really good car to drive. Phoenix, Arizona based Concept Z Performance fixed that transmission issue by swapping in a 6-speed from the Nissan 370Z. Which, you know, rules.

That 6-speed even bolted right up.

Starting with a brand new Q60, CZP turned the car inside out to see how it worked. Luckily, the VR engine architecture has been around for a number of years in a number of cars, and shares a lot of components with the VQ-series of engines, which dates back to 1994. Because of that, a lot of off-the-shelf Nissan parts were able to be used in the construction of this manual trans Red Sport.

Amazingly, even with all of the crazy modern electronics in the Q60, they were able to make it work. It was a lot of trial and error, but it now looks and drives as if it were made at the Nissan factory. With minor machining to the bellhousing to fit the crank position sensor in the right place, a bit of custom wiring, a fabricated transmission mount, and a few 3D printed interior components, it works. It just damn works.

A bit more fiddling with the tune, and some bigger aftermarket blow off valves, and it’s up and at em.

While this isn’t quite the level of cool as the shop that manual-swapped a Ferrari F430 Scuderia, it’s still pretty damn cool. I wouldn’t expect this to be a common modification for the average Q60 Red Sport owner, however, as it’ll likely cost as much as the car’s MSRP just in labor hours, but it’s pretty cool as a showcase of the shop’s talents. Color me impressed.

You can follow the full procedure to manual swap a Q60 Red Sport 400 on CZP’s blog. It’s an interesting read.