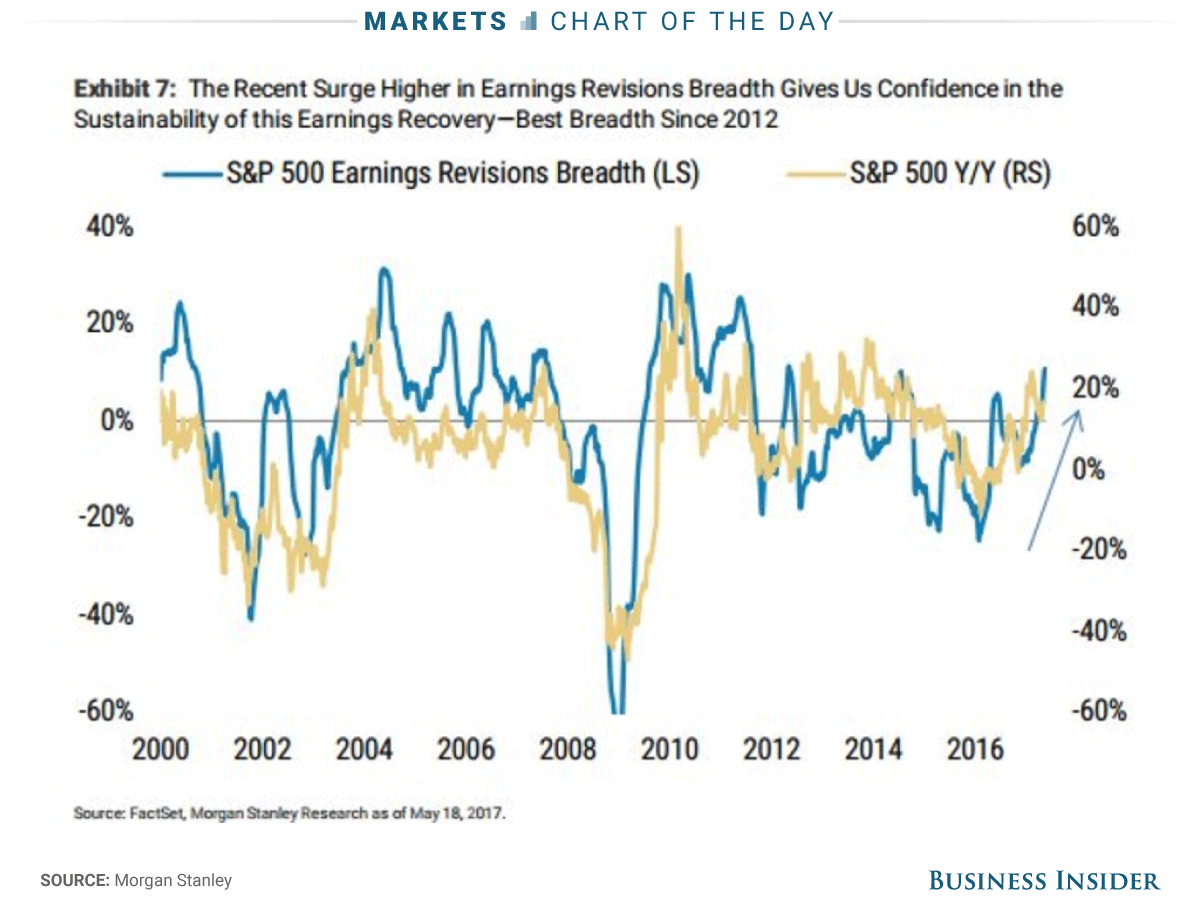 Profit expansion — which has historically been the biggest contributor to share-price appreciation for US corporations — is churning at a rate not seen in almost six years.

And now that more stocks are getting in on the action, the recovery looks likely to sustain itself going forward.

The number of companies revising future profits higher is outpacing those making downward adjustments by the most since 2012, according to data compiled by Morgan Stanley. This measure, known as earnings revision breadth, goes one step further than showing increased overall profit optimism by also quantifying how widespread it is throughout the S&P 500. “The recent surge confirms the sustainability of the earnings recovery that started in early 2016,” a group of Morgan Stanley equity strategists led by Michael J. Wilson wrote in a client note. “The momentum of earnings revisions breadth like that seen recently is often synonymous with higher equity prices over a 12-month horizon.”

The last 10 times S&P 500 earnings revision breadth has climbed 15% over a three-month period, the benchmark returned a median of 15% over the following year, Morgan Stanley data show.

However, one measure shows bullishness slightly waning among hedge funds and large speculators. As of last week, the S&P 500 had the fewest net long positions all year, Commodity Futures Trading Commission data show. Still, the group of investors continues to bet that the benchmark will increase — they’re just less convinced than before.

The same goes for strategists on Wall Street. While they still expect that the S&P 500 will climb 1.1% from Friday’s close to 2,408 by year-end, that average year-end price target has dipped slightly from 2,414 a month ago.

Many investors will say this gradual temperance of stock market expectations is actually a positive for the longer-term health of the ongoing rally. It helps avoid the type of blind overexuberance that can derail a bull market, while short-term selloffs provide enticing buying opportunities for investors still looking to get long.

SEE ALSO:Trump could get ‘beamed into space’ and stocks would be just fine