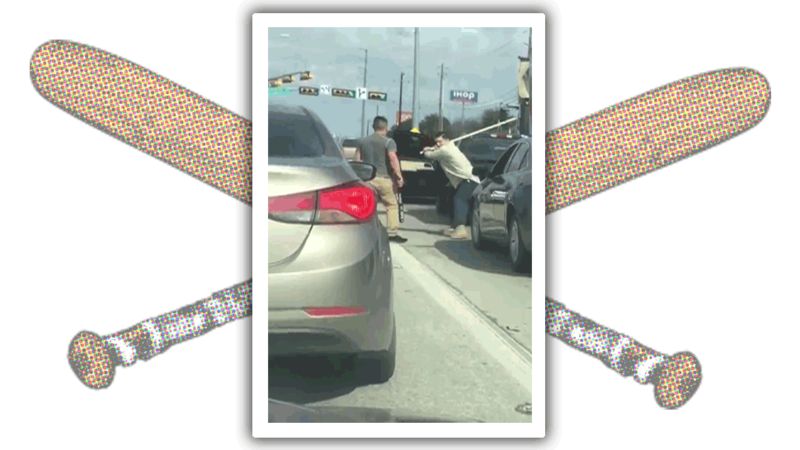 In Austin, Texas, honor is taken seriously. As any Austintonian can tell you, traditions are strong. Traditions like the ancient and venerated art of solving mild traffic disputes with a ritualistic bat-and-pole fight, just like these two noble morons did Monday morning, at least according to a Tweeted video of the epic and ridiculous battle.

Here’s the tweet with the video – I can’t entirely understand the audio, but I think there may be a little offensive language there, so you’ve been warned:

Wow. If you prefer your hilarious morning drivetime stick-fights on YouTube, there’s a stretched version here. So what’s going on here? It seems that the driver of the Chevy Malibu behind the Chevy truck was the one who felt slighted first, because he approaches the truck bearing a bat.

Please note this fancy flourish of the bat, which, along with the presence of a bat at all, suggests a man who has often fantasized about settling scores with a bat in traffic. Bat-boy approaches Pole-man, who steps out menacingly before having to quickly turn back and get his truck out of gear, to keep it from running away. The truck had the right idea.

Pole-man then advances back on Bat-boy, then you can almost see his brain pulsating as he processes the bat, and then remembers that, wait, I think I too have a big whacking-utensil in my truck! Some quick fishing around in the bed reveals the long, slender pole, and our stick fight is now on.

What a glorious bat fight it is! Pole takes the first swing, bat responds with a few quick volleys, and it’s over all too quick, with no clear victor. Bat-boy retreats to, it seems, examine the front of his Malibu, and Pole-man is off, perhaps to take some time to seriously re-evaluate his life decisions.

I’d love to know what happened here that made these two think a big, in-traffic stick fight was the best answer to these problems. Bat seems to have escalated things, but I have no idea what Pole did before this happened.

I’m sure both men soon settled back into their cars, deposited their trusty sticks onto the car’s floor/truck bed, and thought to themselves,

“There. That settled that. Another triumph, and the joy of knowing that there’s no way I’ve made myself look like a complete jackass in front of millions of people.”