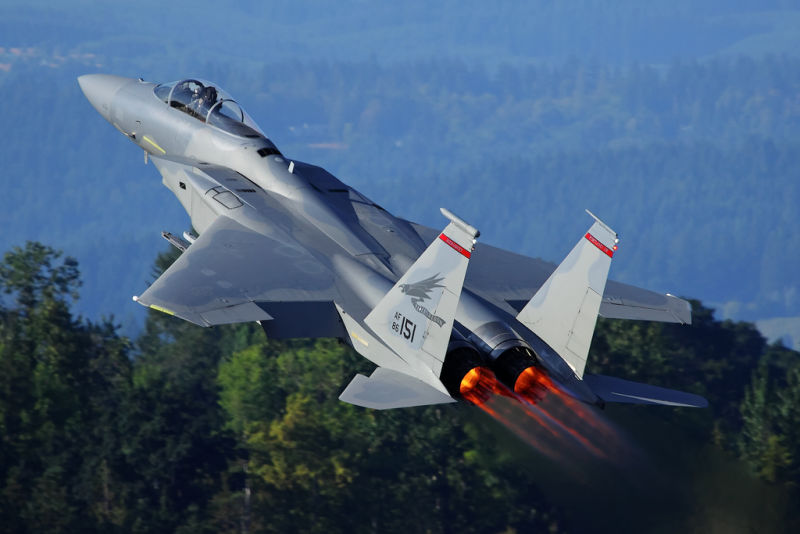 Finland may not be a member of NATO, but it sure is becoming more closely aligned with the organization since Russia became a more belligerent power. Now, in an unprecedented deployment, F-15C/Ds from the 123rd Fighter Squadron home based in Portland, Oregon will descend on Rissala, Finland for cooperative aerial exercises.

The 123rd FS, along with the Florida Air National Guard’s 125th FS and their F-15s, have been very active in Europe as of late. Last year they spent many months in Central and Eastern Europe as part of theater security package aimed at increasing inter-operability among NATO air arms, reassuring NATO allies of America’s commitment to their common defense and deterring potential Russian aggression.

The exercises in Finland will see Oregon’s Eagles return to Europe within just a matter of months after leaving the theater in the fall. As of now the Eagle’s deployment to Finland and the subsequent aerial training events are planned for May and they may also include Finland’s neighbors Sweden and Norway.

These training events will not sit well with Russia, which ardently disapproves of further NATO expansion, especially in and around the Baltic Sea. The fact that Sweden and Norway may also participate will only enrage Moscow more. In the past, the idea of historically neutral countries like Finland and Sweden joining NATO held little water, but with Russia’s Cold War-like reboot underway it is a possibility.

Finland was always somewhat in Soviet Russia’s orbit during the Cold War, but following the fall of the Soviet Union they have realigned themselves more with Europe and NATO member states. This has only intensified following the invasion of Crimea and greatly heightened tensions on the Baltic Sea.

Finland retains a fleet of 61 F/A-18C/Ds and can operate their Hornets from austere locations like long stretches of highway during a time of war.

Finland’s Hornets, which are fairly young by legacy Hornet standards and have received constant upgrades, will be replaced under a future fighter program that was just launched last October. The Super Hornet, Rafale, Typhoon, Gripen E/F and the Joint Strike Fighter have been earmarked as potential replacements. The plan is that the new fighters will be delivered within a decade and fully operational by 2031.

In other words, Finland’s Hornet replacement program is by no means a rushed event. By the time they select their next fighter, the world fighter market will be in a much different place, and the F-35 will hopefully have matured enough to be a much better bet than it is today.

As with Canada, the Super Hornet, especially in its mature form, would be the most logical choice for Finland as conversion would be simplified to a large degree compared to its competitors. And because Finland likes to be able to operate its fighters in austere and harsh environments, the Gripen E/F would also be a good choice.

Since Finland does not primarily use its fighter force for expeditionary warfare, the high-end capabilities and stealth technology seen of the F-35 would be hard to justify.