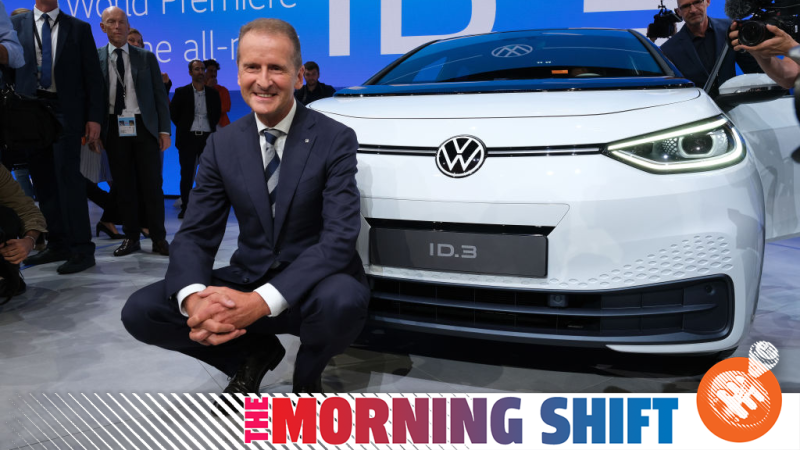 The Morning ShiftAll your daily car news in one convenient place. Isn’t your time more important?

VW is mad everyone’s messing with the economy, Tesla is making moves to expand Fremont, BMW has Brexit plans, and more, more, more. We’re getting wet and wild in The Morning Shift for Tuesday, September 10, 2019.

1st Gear: VW CEO: This Business Will Get Out Of Control

The trade war between the U.S. and China, a dramatically mismanaged fiasco orchestrated by President Trump that has seen escalating tariffs levied on goods and cars between the world’s two largest trading partners, has Volkswagen’s CEO not just disappointed this time, but straight-up upset.

“We come now into a situation where this trade war is really influencing the mood of the customers, and it has the chance to really disrupt the world economy,” Volkswagen CEO Herbert Diess said in an interview with Bloomberg TV. “China is basically a healthy market, but because of the trade war, the car market is basically in a recession. So that’s a new situation. That’s scary for us.”

Concerns about global trade have reached nearly 10 times the peaks seen in previous decades and could shave about 0.75 percentage points off world economic growth this year, according to data compiled by the International Monetary Fund. The auto industry is particularly exposed because of its global network of assembly plants and parts suppliers. Daimler AG, for instance, makes many of its Mercedes-Benz’s utility vehicles in Alabama and exports them to China and other markets.﻿

None of this ever had to happen! But it is. Keep in mind Volkswagen, and most of the major automakers of the world, are busy trying to wrap their heads around electric vehicles as the Chinese and European governments put pressure on them to curb emissions. Plus there was that whole Dieselgate thing they lost billions over. It’s hard to save face when the punches keep coming.

Carmakers need car buyers of the world to be financially secure in making the jump from gas guzzlers to mysterious battery machines, but if prices are artificially inflated over a glorified slap fight, it’s going to bum everybody out, man. I’m sure Volkswagen will be fine regardless, but it’d be really neat if we all put our efforts into stopping global economic decline instead of, like, begging for it.

2nd Gear: The White House Would Like You To Know It Needs Time

Please, everyone, take a chill pill and just let the administration that started this trade shit show have another, another, another go at working something out with China. From Reuters:

White House adviser Peter Navarro on Tuesday called for investors, the public and others to be patient ahead of key U.S.-China trade negotiations planned for next month between top officials in Washington.

“If we’re going to get a great result, we really have to let the process take its course,” Navarro said in an interview on CNBC.﻿

Sure, guy. After zero progress with negotiating with China over trade policies we’re forcing them to reconsider have gone nowhere, and only barely held off on escalating the current tariffs to even new catastrophic heights, for over two exhausting years, I guess you’ve earned the right to beg me for another month.

I will simply take anything short of full out World War 3. Thank you.

After completely fumbling the ball so far with an attempt to scale back Obama-era federal emissions regulations in an ongoing bitch-fit with California, it would appear the federal government is looking at ways to get back at the state for organizing a compromise regulation agreement with four major automakers by investigating a violation of anti-trust laws.

The fight over cleaning up the nation’s fuel economy standards just got a whole lot dirtier.

This is transparently silly, and some members of the House of Representatives, mostly Democrats, will now publicly investigate whether or not the Department of Justice is full of shit. From Automotive News:

House Judiciary Chairman Jerrold Nadler and Representative David Cicilline, who chairs a subcommittee on antitrust issues, said in a joint statement late on Monday the probe of Ford Motor Co., Honda Motor Co., BMW AG, and Volkswagen Group “is only the latest in a profoundly troubling pattern of abuse of power that has flourished under the Trump presidency.”

The two House Democrats added “there is virtually no antitrust theory that the Justice Department can use to prove that this agreement will unreasonably restrain trade or otherwise violate the antitrust laws.”

Reuters and other outlets reported Friday the existence of the investigation as the Trump administration has ramped up its opposition to automakers seeking to sidestep it on rolling back Obama-era fuel-efficiency rules.﻿

It’s not just the Department of Justice—the EPA has also reached out to the California Air Resource Board claiming the compromise agreement with Ford, Honda, BMW and Volkswagen appears “to be unlawful and invalid.”

All of this is likely an attempt to stymie California’s ability to set its own regulatory standards, as it currently has a lot of flexing power over whatever the federal government attempts to do. For some reason this specific case is no longer about empowering individual states—we have a climate to change, ya hippies!

Tesla will soon have four models to build—the Model S, Model X, Model 3 and the upcoming Model Y—and a new permit application would suggest the automaker will add a new production line to its factory in Fremont, California.

Tesla Inc. has applied for a permit from the city home to its lone assembly plant that hints the electric-car maker could be planning another assembly line there.

The permit application to the city of Fremont, California, describes the project as “GA5 demo and rough grading.” GA refers to general assembly, and CEO Elon Musk has previously said that Tesla has been running several lines to produce the Model 3, S and X.﻿

Tesla CEO Elon Musk, an executive known for building the Model 3 outside, under a tent in a parking lot next to a literal trash fire, has been previously noncommittal on plans for Model Y production.

At the crossover’s reveal event, the company didn’t yet know if it would manufacture the vehicle at its current assembly plant in Fremont, or expand the Nevada Gigafactory to assemble cars alongside the battery and drivetrain components.

In more recent reports, Tesla has claimed the Model Y would be added to the mix in Fremont. The permit application reportedly didn’t specify which vehicles would be assembled on the new production line.

Brexit has already effectively killed any sort of automotive investment in the UK, and if no deal is reached between the grumpy island nation and the European Union, BMW will join the club of automakers slowly backing away toward the exit themselves. From Bloomberg:

BMW AG would reduce output at its plant in Oxford by eliminating a work shift should the U.K. opt for a hard Brexit, according to its chief financial officer.

The German carmaker already plans to completely halt production on the Oct. 31 deadline when Britain is expected to leave the European Union, as well as on Nov. 1, CFO Nicolas Peter told reporters on Tuesday on the sidelines of the Frankfurt motor show.

“We’d have to increase prices, and we have to curtail production to react to such a development,” Peter said on BMW’s contingency plans should the U.K. drop out of the EU without an agreement. “The plans are in the drawer.”﻿

The good news is that the UK has a new prime minister. The bad news is things have somehow become even more of a shitshow.

Automakers want one thing: to cut costs and make money. Brexit increases costs and automakers will lose money. Somebody help them budget this, their market is dying.

Today is the first day of the Frankfurt Motor Show, and thank goodness! We’ve got a ton of stuff on a lot of fun new cars, like the new Land Rover Defender, a cool retro Hyundai EV, an ugly as sin BMW—who could have guessed!—yet another electric Mercedes sedan concept, and much, much more.

Take time to check it out. It’s only Tuesday, you’ll get your work done tomorrow. There are new cars to judge! Let me know what your favorite reveals are.