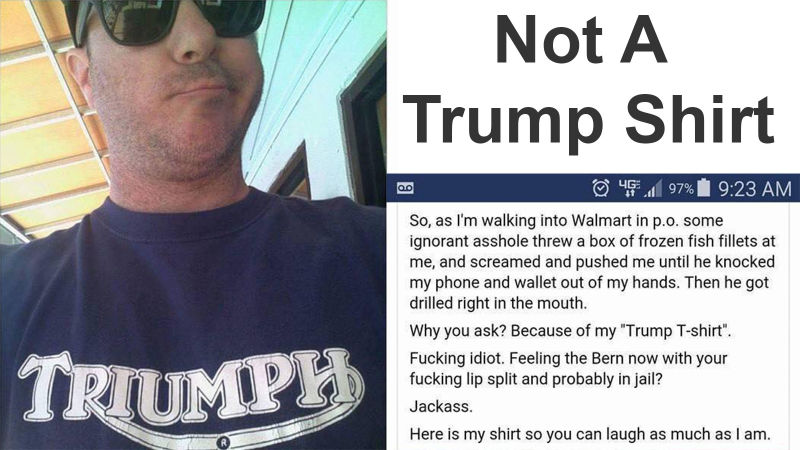 Isn’t it amazing how the elections bring out the best in our culture? This unidentified man claims on Facebook that he was just trying to walk into a Walmart when he was attacked for wearing a Triumph shirt. Too close to “Trump” for some people, he said. I’ve been unable to find out whether it’s real or fake, but it’s sadly plausible these days.

The post showed up on this page and others and has been making the rounds as of late.

You see, the Triumph logo dates back to the 1930s and is fairly easily recognizable AND contains TWO more letters than the presidential candidate’s name. But as it seems, elections—this one in particular—can turn normal and rational humans into complete morons.

It turned the nice elderly couple sitting at the table next to me at dinner last week into a drunk, swearing pair of banshees who yelled at me for wanting free college (despite already graduated with a Bachelor’s, teaching credential, and Master’s Degree thank you very much) and a job where I had everything handed to me (if you only knew!)

It also apparently turned some jackwagon outside of a Walmart into a frothing dingus, who yelled at, shoved, and was then punched in the mouth by this British bike loving shopper.

We apparently can’t keep our hands to ourselves. And to think, this was part of why I left teaching middle school.

My biggest question about the whole thing is whether this really happened at all. In a world where the two leading GOP candidates are getting into Twitter beef about their wives, it’s certainly possible. But, with just a post from some Facebook group as the source, it’s hard to put much weight in it.

If anyone knows the guy in the photo, we’d love to talk to him. Hit us up at tips@jalopnik.com.